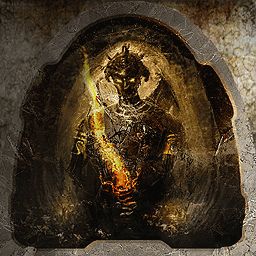 Many individuals such as Mortanius and Ariel believed Raziel to be the Hylden Champion and also believed that Kain was his equal, while others such as Vorador and Moebius knew the truth of the matter. Janos did not figure out Raziel was the Hylden Champion until Raziel showed him the Wraith Blade, however Janos also came up with the conclusion (just like Moebius and Vorador) that Raziel was both and still trusted him. Raziel was in fact the Hylden Champion, however he was also the Vampire Champion, as a result of his free will which gave him a hybrid destiny. The prophecy refers to Raziel reviving Janos for the Hylden to use as a vessel in order to escape, Raziel by sacrificing himself armed the Scion of Balance (Kain) with the Soul Reaver which would be used against the Elder God. The flaming sword is the Wraith Blade which is also Raziel's future soul, however as the Vampire Champion he does wield the Reaver (the Wraith Blade is the spiritual version of it) and becomes trapped in the physical Reaver only to be released and become the Wraith Blade, which will be disperse into Kain to heal him of the corruption.