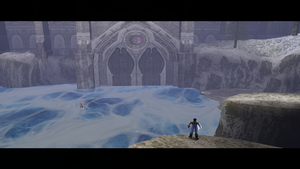 "The frozen surface of the lake had bound the gates of the stronghold shut.
The Sarafan surely had some other means of entry, but this was the only one known to me.
To infiltrate the fortress, I would need to find some way to release these gates from their icy bonds."
―Raziel — Listen (file info)[src]

Ice was a terrain type encountered encountered in Blood Omen: Legacy of Kain, Soul Reaver 2 and Legacy of Kain: Defiance. Typically it behaved as a solid object but could be very slippery. Because of the status of ice as frozen water, ice could also be used as a puzzle element or related to elemental applications, where it was particularly associated with the Fire Reaver and Water Reaver.

Ice was first seen in Blood Omen: Legacy of Kain where it appeared in the capacity of a terrain type, often used to indicate colder areas of the map. Ice was usually found alongside water and near fallen snow. Neither the ice or fallen snow would cause damage to Kain although it was dangerous for other reasons. Ice was unusual in that it was very slippery, meaning that when Kain developed any momentum in a particular direction, he would continue to slide in that direction for a short time, even when attempting to turn or stop. This was made even more hazardous by the placement of ice nearby water or other obstacles such as Spike pits. Ice was useful in some contexts however, with few enemies able to cross over it.[BO1][BO1-C4][BO1-C5][BO1-C8][BO1-C9][BO1-C10][BO1-C11][1]

Ice returned as a terrain type in Soul Reaver 2 where it was seen in the latter stages as Raziel traveled into Nosgoth's early history and when Raziel arrived in this time it was presumably winter as much of the land was covered in fallen snow and icy textures. Bodies of water, such as the Great Southern Lake and the lake outside Janos Audron's Retreat were frozen over by ice and largely impenetrable because of this. Ice could also be found in abundance inside Janos's retreat and certain doorways even had large build ups of cracked ice covering them. Icy textures were still mildly 'slippery' but this was much toned down and barely noticeable compared to its previous apperance in Blood Omen, with little more than a subtle footstep sound difference to indicate and change from ordinary terrain.[SR2][SR2-C7][SR2-C8][SR2-C9]

In addition to its role in terrain and environmental conditions, ice was also associated with a number of Reaver enhancements and was often related to them in a number of puzzles. The first of these to be encountered were several iced-over cracked barriers that were seen in the 'inner sanctum' of Janos Audron's Retreat in the Vampire Interview chapter of Soul Reaver 2. These required the Reaver bolts of the Air Reaver to 'blow them apart', dispersing the barriers.[SR2][SR2-C8][2]

Shortly afterward in Blade of Vengeance (or potentially earlier if Raziel explored that way in On to the Past) Raziel would discover that the surface of the Great Southern Lake had frozen over, preventing his access to the dock doorway of the Sarafan Stronghold. To enter the stronghold he was required to use the Fire Reaver on the nearby Fire Plinth which would heat a portion of the lake, melting the ice and allowing the dock doorway to swing open.[SR2][SR2-C7][SR2-C9][2]

In Legacy of Kain: Defiance ice was particularly associated with the Water Reaver and when Raziel gained the enhancement in Find Vorador he was able to use it in combat - allowing him to briefly freeze enemies when it was charged, as well discharging an 'ice blast' as a Reaver spell. In addition the Water Reaver also had a puzzle application - it allowed Raziel to freeze Waterfalls, turning them into ice temporarily so they could be climbed as ordinary Scalable walls.[DEF][DEF-C8][3]