In Darkness We Gather 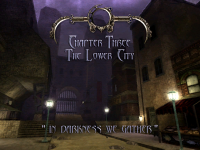 Chapter 3:The Lower City: In Darkness We Gather was the third level of Blood Omen 2. It followed Kain's journey through the Lower City, from him leaving the Smuggler's Den in Chapter 2 until he reached Sanctuary and met the Cabal .

After leaving the Smuggler's Den, Kain was met by Umah who, under her own orders to investigate the Industrial Quarter, sent Kain through the Lower City, meeting various Cabal contacts to find the location of Sanctuary. Investigating the streets of the Lower City, Kain followed Umah's advice and went to meet the Tapster at the Red Raven Pub, who was able to reveal a message for Kain; that the Newsstand Vendor, could provide further information. She was also able to allow Kain to bypass gatekeeper Duncan (by claiming he worked for Ducket's Traders).

Meeting with the vendor, Kain was able to find that Sanctuary was located in the basement underneath the Blue Lady Curios shop in the eastern part of the district, the vendor was also able to provide Kain with the password "Evernight" which allowed him to pass a second gatekeeper. Passing through the Ducket's Traders warehouse, Kain made his way through the sewers and back out to the streets where he found the Sarafan heavily guarding the 'City Power Werks' (apparently due to earlier the Cabal/Cabal contact sabotage).

Shortly afterward, Kain passed by the City Reformatory and met and briefly pursued Sebastian (although Kain was unaware of his identity). Returning to the sewers, Kain was able to deactivate a section of the Ward Gates on the streets above and open his way to the Blue Lady Curios shop, where he found Sanctuary, and it's leader, revealed to be Vorador . The meeting however was interrupted by an Injured Cabal vampire, who told Vorador that Umah had been captured whilst investigating something significant in the Industrial Quarter and had been taken to the Sarafan Keep . Anxious to rescue Umah, Vorador sent Kain to the Bishop of Meridian in the Upper City, who knew a secret entrance to the Sarafan Keep[BO2].