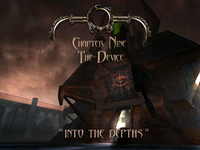 Chapter 9: The Device: Into the Depths is the ninth chapter of Blood Omen 2, it followed Kain's descent into the Device to destroy the Mass and the Device itself. It is succeeded by Chapter 10:the Wharves.

After finding a method to destroy the Device from the Builder in Chapter 8:The Eternal Prison, Kain returned tothe Beast's chamber. The Beast warned him of the perils that awaited in the Device; exposing the Sarafan as controlled by the Hylden, and the Sarafan Lord and the Glyphwrights as members of the species.

Descending into the machinery,Kain found that the Device penetrated deep underground and was manned byHylden Scientists, Warriors and 'domesticated'Lesser demons, as well as by Slaves; Human servants of the Hylden. Fighting his way down, Kain was able to reach the core of the Device, a large cavern containing the Mass and was able to reach the Mass' feeding platform. Slitting his own wrist, Kain poured the poisonousBuilder 's blood (or perhaps more likely that of the Hylden he fed on through the Device) into the feeding tube, causing the Mass to shrivel and rupture and eventually die, taking with it the Hylden's chance to use the weapon[BO2].

Kain returned to the Beast's chamber, to find that with the Device destroyed, The Beast had regained his true form; that of Ancient Vampire Janos Audron . Janos glossed over the events of the Elder wars, explaining the Hylden's banishment to the Demon Realm and how Kain's decision to damn the pillars (at the conclusion of Blood Omen ) allowed a single Hylden (the Sarafan/Hylden Lord) to re-enter the Material Realm and, using the Hylden Gate, bring other Hylden through. Janos concluded that The Sarafan was set up as a front for the Hylden to work on the Device and now the Device has been destroyed they will use to Hylden Gate to bring about a full-scale invasion of Nosgoth. Janos also reveals that the Hylden are linked, like an "umbilical cord to the other world"[1] and closing the gate should kill all the Hylden in Nosgoth, including the Sarafan Lord.

Janos teleported the pair to Sanctuary, where they met with Vorador and the rest of the Cabal and explained the new threat. Janos told them of his plan to reach theHylden City and close the gate, but he has found that a magical shield prevents teleportation. Umah suggested that several of the ships leaving the Wharves of Meridian take the same route out of the harbor take and may have been heading to the Hylden City. Sent to the Wharves to board a boat to the Hylden City and deactivate the shield to allow the othersteleport across and instigate a final assault, Kain reluctantly accepted Umah's offer of help and the two vampires travelled to the Wharves[BO2].