"As it was borne from hellfire, forged by the Necromancer’s magic, my armor resists fire and provides me with strong defense."
―Kain[src]

The Iron Armor was a suit of armor worn by Kain in Blood Omen; providing him basic protection against the threats of Nosgoth. The armor was subsequently shown in cutscenes in Blood Omen 2 and could be accessed ingame through several methods.

In Blood Omen, the Iron armor was the most basic of his armor repertoire, available at the start of the game along with the Iron Sword,[1] it provided a decent all-round protection for Kain.[2][3] The armour was originally worn by Kain as a Human before his transformation into a vampire and it was originally white in colour. Kain was wearing this armour when he was murdered by brigands and when the Necromancer Mortanius resurrected Kain as a Vampire, the Iron Armor was transformed along with him into its black and red form,[4] noting the change in his armor Kain commented that it was now 'forged with hellfire' and was presumably now somewhat enhanced over regular armor.[5]

In Gameplay, both the Iron Armor and its accompanying weapon the Iron Sword, were quickly superseded by more powerful and exotic weapons and armor; in FMV cutscenes however, Kain is still shown wearing the Iron Armor (along with the Iron Sword) right up until he made his fateful choice at the Pillars of Nosgoth and he is depicted wearing it in Blood Omen's 'bad' ending after the Pillars Collapse[BO1].

The opening video of Blood Omen 2 briefly presents Kains 'dreamed' recollections of the Collapse of the Pillars; in which he is depicted walking away from the collapsing pillars wearing the Iron Armor and wielding the Soul Reaver.[6] The Armor along with the Soul Reaver, could be 'unlocked' through a variety of methods including cheating, hacking and use of Bonus mode or the control station; the combination was extremely powerful and could kill virtually every enemy in the game in three strikes or less, though this is unlikely to be 'canon'[BO2].

Defiance presented a brief cameo of the Iron Armor in its original form, as a portrait of Kain in his Mausoleum depicted him wearing it[DEF]. The probably non-canon nature of Blood Omen 2's 'cheat' Iron Armor, means that Kain has not been seen with the Armor since the collapse of the pillars; It is unknown what happened to it following the events of Blood Omen and Kain seems to have abandoned it shortly afterwards. 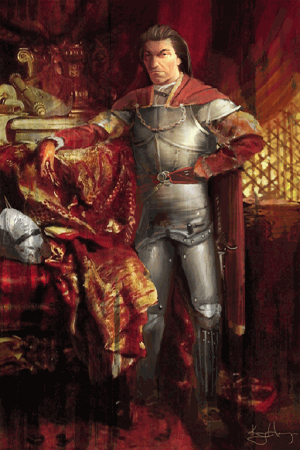