"Vorador has told me all your stories, Kain. He said that you would stop at nothing to achieve your great ambition: absolute power. And when you control Nosgoth, are we to believe that you would let us vampires live, and "do what we wish?" We are the only ones who could stand in your way. No, you will have to hunt us down and kill us, and how is that different from the rule of the Sarafan Lord?"
―Umah[src]

Kain's vampire army was a faction first depicted after the third paradox at the end of Soul Reaver 2, which created the fourth timeline. With this timeline's resurrection of Vorador in the post-Blood Omen era, Kain was able to avail of the elder vampire's skills, utilizing him to raise a new generation of vampires to conquer the land of Nosgoth. This new vampire army's campaign ultimately came to an end at Meridian, where Kain was defeated in battle by the Sarafan. 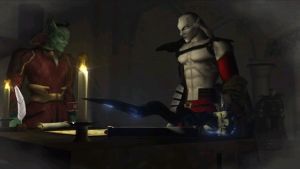 Kain plotting the conquest of Nosgoth with Vorador. 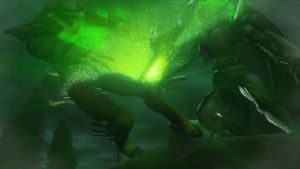 The Sarafan Lord strikes Kain down, claiming the Soul Reaver.

The Vampire Army did not exist prior to the climactic paradox which led to the resurrection of Vorador.[1] Events in the third timeline subtly imply that it could not have been raised until at least 100 years after the collapse of the Pillars; Raziel witnesses a statue of Moebius holding what appears to be Vorador's head, aloft, in the Sarafan Stronghold. As history allows only slight alterations to the timeline upon a paradox, it seems possible that Vorador was not raised until after this time period.[2]

The details of Vorador's resurrection have not yet been explored in the series, but were planned to be covered in Legacy of Kain: Defiance.[3] After he was raised, he entered an alliance with the younger Kain, siring a new race of Vampires to serve as his troops.[4] Fuelled by his ambition to conquer Nosgoth, Kain was impeded by the revived Sarafan Order headquartered in Meridian.[5] Seeking to combat this threat, Kain led his armies southwards, passing through Ziegsturhl, Provance and Freeport before meeting the Sarafan in battle outside the capital, some 200 years after the fall of the Pillars of Nosgoth.

Unfortunately, Kain's chance at victory was crippled by two misfortunes. His right-hand general, Sebastian, betrayed the army to the Sarafan Lord, selling himself to the enemy and arranging an ambush that destroyed the majority of his former allies.[6] Additionally, Kain's champion Magnus - seeking to end the war prematurely - departed the camp in an attempt to assassinate the Sarafan Lord. The attempt failed, and Magnus was transported to the Eternal Prison, his disappearance causing his allies to assume him a traitor to their cause.[7]

Equipped with the Nexus Stone, the Sarafan Lord was immune to the destructive power of the Soul Reaver wielded by Kain. He struck Kain down in single combat, claiming the Reaver for himself and securing the elimination of the Vampire Army once and for all.[5][8] Following its destruction, Vorador would reinvent the legion in the form of an underground resistance movement known as the Cabal, which Kain would comply with 200 years after his defeat, on his reawakening in Meridian. 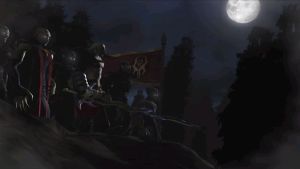 The assembled legionnaires of the Vampire Army.

Kain and Vorador personally led the Vampire Army, while notable legionnaires of the new generation sired by Vorador or his descendants included Faustus,[9] Magnus and Sebastian. Umah was also created by Vorador,[10] but it is uncertain whether she was alive during the period in which the Army existed.

The symbol displayed on the banner of the Vampire Army originally appeared as Kain's clan symbol from his empire in Legacy of Kain: Soul Reaver[SR1], designed by Daniel Cabuco. The symbol's crown is representative of Kain's arrogance, while its fangs signify his vampiric nature.[11]

Kain's soldiers and guards shown in the introduction all appear to utilize the character model unique to Sebastian in the game itself. There are multiple "copies" of Sebastian visible in Kain's headquarters and in the foreground of the army during the battle[BO2].