Land of the Nemesis

"Welcome, stranger. To the most prosperous land in all of Nosgoth."
―Villager[src] 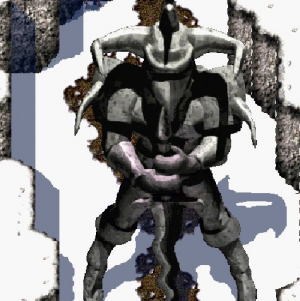 The Land of the Nemesis was a playable location seen in Blood Omen: Legacy of Kain . It was the home of boy-king William the Just, who would become the tyrant The Nemesis.

The Land of the Nemesis was first seen as Kain sought out Elzevir . The Land was bordered by a large Colossus like statue of the Nemesis. If Kain attempted to enter he found that the Nemesis troops were massing in tents behind a devastated Stahlberg . It is possible to enter the castle of The Nemesis using a cave to the far left of the map, near a moon cave, which allows Kain to travel behind the walls and gain entrance to the castle-you cannot kill King William however and most of the castle doors are locked.

When Kain returned to Willendorf with Dollmaker's Doll he attempted to use the Army of the Last Hope to defend Nosgoth against the Legions of the Nemesis, this ignited the Battle of the Last Stand, which took place in the nearby Plains of Blood . With the Army of Hope defeated, Kain escaped using The Time Streaming Device and found himself 50 years in the past. Realising that he had an opportunity to wipe out the Nemesis before he became a tyrant, Kain travelled to the Land of The Nemesis.

Arriving at the borders of the Land of the Nemesis, Kain discovered the Nemesis statue only half-built. In this time there was less opposition from guards and Kain was able to enter The stronghold of William the Just. Deep inside the Castle, Kain was able to view (from a distance) Moebius having a conversation with William, encouraging him to be supicious of and strike out against his enemies. Moebius also gave William a supply of Weapons and warned him of a vampire assassin. Shortly afterward Kain confronts William and find curiously that he is armed with a Soul Reaver of his own, which breaks in the battle. Kain is able to kill William causing a Soul Reaver Paradox and changing history, with William the Just dying a martyred saint rather than a tyrant. When he defeats William, Kain finds a Time Streaming Device in Williams chambers and uses it to return to his own time, escaping William's guards.

Kain finds himself in his native time in a rundown and abandoned castle, there are a few vampire hunters to deal with, but nothing like the organisation of William's soldiers. Kain exits the Castle to find the Nemesis statue collapsed and Stahlberg restored, presumably indicating how Kain has changed history for the better. However south of Stahlberg, Kain finds out the true cost of his time-travelling; as William's death has united his subjects and all humans in a genocidal hatred of vampires; allowing the creation of Moebius's mercenary army and, with Vorador 's Death by Moebius' guillotine leaving Kain as the last surviving vampire in Nosgoth.

The Colossal Nemesis statue is a curiosity; It is first seen in finished and dominating in Kain's original time; when Kain travels 50 years into the past, he finds it half built. Strangely when he returns to his time, it is completed and toppled. This seems strange as it should probably have remained unfinished, rather than being completed then being knocked down.