Lara Croft and the Guardian of Light

"Meanwhile, in another World...and kind of in the past... "
―Raziel and Kain Character Pack introduction[src]

Lara Croft and the Guardian of Light is an arcade-style video game developed by Crystal Dynamics. It is the tenth game in the Tomb Raider franchise (despite officially not being considered part of the franchise proper) and the fourth game developed by Crystal Dynamics. Significantly, Guardian of Light featured Downloadable content (DLC) that allowed Raziel and Kain to be used as playable characters for the first time since Defiance. 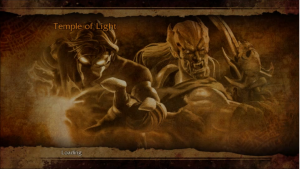 Guardian of Light is a fixed-camera 3D platform viewpoint action video game developed by Crystal Dynamics and published by Square Enix Europe for the PC, PlayStation Network, Xbox Live Arcade and the iOS as part of the Tomb Raider series (though it does not bear the "Tomb Radier" brand name and is not considered part of the franchise proper, fitting in between the continuity of Crystal Dynamics first Tomb Raider trilogy and the upcoming reboot). The game was made available only for digital download on 18 August 2010. Unlike previous games in the series which were third person adventure games, Guardian of light is an isometric based arcade shooter with a heavy emphasis on cooperative gameplay.

Downloadable content (DLC) was released for Guardian of Light between October and December 2010, including a "Raziel and Kain Character Pack", which replaced the main playable characters (Lara Croft and Totec) with Raziel and Kain respectively. Whilst In this mode, the dialogue between characters was replaced by excerpts from the Legacy of Kain series edited into a humorous storyline.