The Leaf Bladed Sword is a hidden and unique weapon that can be acquired through various means (though not used in Combat) in Blood Omen 2 [1][2].

The Leaf Bladed Sword can only be encountered once in the course of Blood Omen 2, at the very end of Wild Places, as Kain attempts to enter the Device. The Leaf Bladed Sword is located on the floor along with a set of other weapons directly 'behind' the Device, passed the Ward gates and outside the Device's enclosure walls and as such it can require the use of cheats or hacks to acquire the sword[BO2][2]. 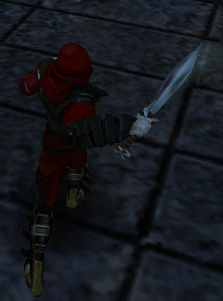 Unlike other weapons in the game, the Leaf Bladed Sword's location means that it cannot be tested in Combat; with the only enemy or NPC's around being the Glyphwrights behind the Ward Gates (who can be approached, but attacks pass through them) and the fact that the sword itself vanishes as soon as Kain encounters The Beast. Nevertheless, the sword can be demonstrated to have a basic three strike combination and is used in a Fury and Berserk strikes and combinations[BO2][2].