The comic serves as a brief prequel to the game, starring the vampire Raziel in a story shortly prior to his execution, as he encounters a mysterious entity who forewarns him of his impending journey. Notably, it makes direct reference to some of the material Crystal Dynamics were forced to excise from Legacy of Kain: Soul Reaver in order to meet their deadline, including the character of the Priestess and the events at the Pinnacle of the Silenced Cathedral.

In an unidentified area in the Soul Reaver era, the vampire Raziel reflects that it has been a millennium since he, the Council, and Kain began to subjugate Nosgoth and enslave humanity. He feeds upon what appears to be a human female when he realizes something is wrong; her blood is neither that of a mortal nor a vampire. The woman identifies herself as a construct of the elder gods, sent to deliver him a prophetic warning. She intimates that Kain's empire is nearing its demise, that the immortality of vampires entails that souls are stuck in limbo, and that the balance between life and death has been compromised.[SR1-Comic]

The entity comments on Raziel's wings, noting that his pupation has surpassed Kain's. She alleges that Kain will prove jealous, and will rend the wings from Raziel's back before casting him into the Lake of the Dead – however, Raziel will live on, reborn as a reaver of souls. Enraged, Raziel denies the construct's portents as treachery poised to turn him against his brethren, and attacks her, decapitating her with his claws. Her disembodied head, now grotesquely deformed, remains sentient, and continues to taunt him. She predicts that his brothers Melchiah and Zephon will devolve into warped monsters, and that Raziel will murder them, consumed by fratricide.[SR1-Comic]

She states that Raziel will kill the High Priestess of the vampire worshippers, and that the bells of the Silenced Cathedral will ring out across the land. Encouraging him to unveil the secrets of the ancients, she urges him to embrace his future. His patience exhausted, Raziel throws the construct's remains into a nearby fire, rejecting her claims and reaffirming his allegiance to Kain. He does not fear his master, as he is one of the few in Nosgoth who knows Kain's truth: that he, and all vampires, were once mortal. With this in mind, Raziel departs to meet the Council at the Sanctuary of the Clans, where he hopes to share in Kain's vision for their destiny.[SR1-Comic][SR1-C1]

Players (in order of appearance)

The Legacy of Kain: Soul Reaver comic was released in October 1999, shortly after the game itself shipped. Its production was made easy thanks to previous "advance work" between Core Design, Eidos, and Top Cow on a series of Tomb Raider comic books. The Legacy of Kain publication was always conceived as a "one-shot deal", but series director Amy Hennig of Crystal Dynamics commented that "if interest in the game continues to be strong, it's not unreasonable to think that there may be more comics in the series. If so, the team and I would definitely love to collaborate with Top Cow on any future developments".[1] A sequel did eventually materialize in the form of 2004's Legacy of Kain: Defiance comic.[DEF-Comic] 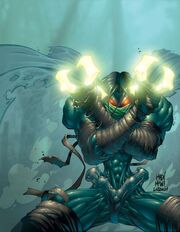 Most of the "prophecy" panels in the comic are based on "signature shots" from the game. Top Cow's David Boller, the primary artist, "hadn't drawn many monsters" prior to his work on the project. He felt that "it was fun to work from the concept art Eidos had sent [him]", considering that "the challenge is to adapt the 3D renderings of the game in a style that is acceptable to the comic book audience".[2] Some pieces of his monochrome line art for several pages were revealed prior to release in a "preview edition" for the Tomb Raider comic series, while other samples were published on his personal website.[2][3]

As the comic was produced before Legacy of Kain: Soul Reaver was finalized, it contains a number of overt references to content which was cut from the originally-conceived design plans for that product's final chapters.[3] Among these are a rare depiction of the deleted Priestess character, a mention of her possession ability, hints that Raziel would conclusively confront and destroy Kain, and the planned epilogue involving Raziel's eradication of Nosgoth's vampires at the Pinnacle of the Silenced Cathedral.[4][5][6][7][8][9] Time constraints entailed that none of these components could be produced and included in the finished game.[10][11]

Although this is the first of Top Cow's contributions to the series, it is not the only Legacy of Kain comic which appeared in 1999. Another, the Vorgeschichte, was featured in Das Offizielle Lösungsbuch - Legacy of Kain: Soul Reaver, released that year.[12][13] Comic book writer and artist Joe Madureira had also previously illustrated Raziel in his fan-art cover for March 1999's PlayStation Magazine.[14]

Unlike the Legacy of Kain: Defiance comic, the Legacy of Kain: Soul Reaver comic does not include a credits page.[SR1-Comic][DEF-Comic] Its cover art features the signatures of Top Cow artists Joe Benitez, Matt Nelson, and Joe B. Weems V, and the first page of its German localization identifies Matt Hawkins as responsible for text and David Boller responsible for artwork.[SR1-Comic][19] The website ComicBookDB.com includes a more comprehensive list of contributors:[20]