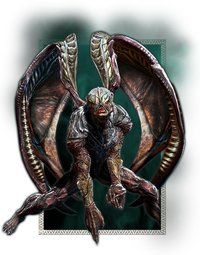 Sentinels appeared as a character class in Nosgoth for the vampire race. They were among the first six classes to be introduced.

The Sentinels were Soul Reaver era vampires affiliated with Kain's empire, and the last survivors of the Razielim clan. Persecuted and doomed to devolution after Raziel's execution, they fought under Dumah and Turel's command against the humans in the War for Nosgoth, hoping to restore their pride and their malnourished bodies in battle.

Sentinels were particularly unique among the playable combatants of Nosgoth, as they were winged beings: the only characters capable of flight. Described as "an immensely cool character class" by design director Bill Beacham, Sentinels were difficult to master, but their unrivaled mobility enabled them to perform effectively as scouts, surprise attackers, and skirmishers alike.

"The Sentinels are devolved descendants and represent the last remnants of the once-proud Clan Razielim. Sentinels have developed large wings that allow them limited flight abilities and they use this mobility to scout and strike unsuspecting enemies from above. Dark and twisted, Sentinels are haters of Humanity."
―Nosgoth official website[src]

The Sentinels were vampires of the Razielim clan, descended from their patriarch, the lieutenant Raziel – who, in turn, was sired by Nosgoth's emperor, Kain.[SR1-C2][SR1-C1] Vampires of Kain's heritage were turned from human corpses, and evolved with age, attaining higher forms and new gifts over time.[SR1-C1][OPM-SR2-Funk][1] Raziel and his clan were destined to develop wings as part of these hibernatory adaptations.[GI-SR1-Face] Eventually, Raziel himself surpassed Kain, growing to become more evolved than any other vampire in the land.[SR1-C1][SR2-Official]

This incident provoked dissent among the Razielim elders: while some championed Kain and regarded Raziel's newly fledged wings as a sign of blasphemy, others supported their leader, viewing his metamorphosis as a blessing. Unmindful of the schism, Raziel presented his wings to Kain, but was condemned. Kain ordered his execution, instructing Raziel's fellow lieutenants, Turel and Dumah, to cast him into the Lake of the Dead.[SR1-C1]

The Razielim elders anticipated repercussions, and relocated all of their pupating kindred to a secret vault in the mountains east of Coorhagen. After Kain abandoned his empire, the lieutenant, Zephon, convinced Turel and the Council to exterminate the Razielim in their master's stead.

The five clans bore down on Raziel's clan territory. Those Razielim responsible for caring for their pupating peers in the locked vault were slain in an ambush, all adult and fledgling members of the clan perished at home, and only the winged elders escaped the assault. They attempted to rendezvous with their underground brethren, but were preempted by Turel's forces, and, soon after they changed course to Dark Eden, the Watchers eliminated them.

The Council argued over the division of the spoils, but failed to agree, and a centuries-long Vampire civil war erupted. Meanwhile, the few hundred Razielim secreted away in isolation began to awake, but – deprived of blood, and unable to escape – they physically degenerated over the decades, manifesting chitinous exoskeletons and leathery wing membranes.

Slowly but surely, the devolved, ravenous survivors scratched their way to freedom, and sent a group led by Eskandor to ascertain their whereabouts. They came upon Coorhagen, deserted but apparently massacred by human forces, before pressing on to their home territory.

Exhausted beyond measure, and still ignorant of the massacre which had transpired during their absence, the last of the Razielim stumbled upon Dumah and his clan, who occupied the area. Eskandor expressed subservience to Dumah. He informed the lieutenant of the circumstances which befell the Razielim, and of their discovery in the north, before pleading for sustenance.

Artwork of the "classic", or evolved, Sentinel skin.

Dumah surmised that the vampire civil war had offered Nosgoth's enslaved human population the chance to plot a powerful uprising. He was hesitant to slaughter the wretched survivors, believing that they might prove valuable in the effort to subjugate the mortals, and could be disposed of when no longer useful.

Dumah privately informed Eskandor of Raziel's death, and of the Razielim purge, but neglected to mention his own role in their sire's execution. He gave Eskandor a chance to show his loyalty, and Eskandor provided evidence of human activity in Valeholm.

The Council met to discuss these findings, and decided to spare the Razielim for use as specialist troops. Agreeing to a truce, the clans moved against the humans to secure western Nosgoth and Freeport, and these new soldiers – the Sentinels – played a crucial role in the mission. As the war for Nosgoth progressed, they continued to serve under Dumah and Turel, with Eskandor acting as their sergeant. Receiving the blood they required in battle, the Sentinels' disfigured bodies began to overcome the effects of their devolution, gradually reverting to their natural, evolved forms.

Though the Sentinels developed fealty to the Council, tension remained, and some discussed the possibility of retribution for past events, should they outlive the war.

By the time of Raziel's resurrection, the Sentinels had vanished. Raziel found no trace of his descendants on his travels, and their territory lay desolate.[SR1][SR1-C2] Melchiah cryptically implied that they had been wiped out.[SR1-C3] Raziel accused Kain of committing genocide against the Razielim, but Kain neither confirmed nor denied this, ambiguously saying, "what I have made, I can also destroy."[SR1-C4]