Legions of the Nemesis

"They came at me in throngs, no fervor as strong as that inspired by a madman. The Nemesis armies were fierce and showed no signs of subsiding."
―Kain — Listen (file info)[src]

The legions of the Nemesis, also referred to as the Horde, was an enormous army of humans led by a tyrannical warlord known as the Nemesis (formerly the boy-king William the Just). They were headquartered in the northern Land of the Nemesis, and began their path of conquest during the Blood Omen era. It was believed that the legions heralded the end of civilization in Nosgoth.

Kain forged an alliance with the Lion Throne to fight the legions in the Battle of the Last Stand, but this plan was botched. Cornered, he instead traveled back in time and paradoxically killed a younger version of William, changing history and expelling the legions from existence. Thus, of the four timelines explored in the Legacy of Kain series, the legions were present only in the first timeline. 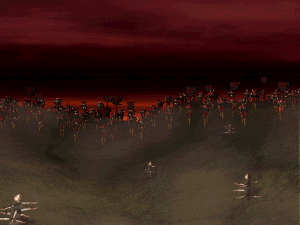 The assembled legions at the Battle of the Last Stand.

In the obscure past, "an ancient seer once prophesied the march of an enormous army that would lay waste to the last havens of peace in Nosgoth and bring about the end of civilization". This seer explained that it would gather in northern Nosgoth, would crush all who oppose its expansion, and would be dubbed the Legion of the Nemesis by the people. "The prophesy foretold rape and torture, death and destruction on cataclysmic levels, and that it cannot be stopped".[1] These premonitions were largely true: the legions came into being during the pre-Blood Omen era.[BO1-C10][SR2-C5]

Kain witnessed the rise of the once-beloved young King William the Just in his youth: "his transformation into the 'Nemesis' who laid waste to Nosgoth".[SR2-C5] After his death and resurrection in the Blood Omen era, Kain was tasked with restoring the Pillars of Nosgoth.[BO1-C1][BO1-C2] His quest led him to the Oracle of Nosgoth, who indicated that he would need to confront the legions at some point.[BO1-C6] This proved to be the case - Ariel eventually advised him that "the Legions of the Nemesis are on the march from the north, crushing all in their path".[BO1-C9]

Though he seemed slightly ambivalent at first - he "smirked thinking of the carnage [...] at the hands of the Legions" - Kain acquiesced, and sought a way to stop them.[BO1-C9] With the legions poised to invade Willendorf, Kain traveled there to rouse the Army of the Last Hope.[BO1-C9][2] On passing through Stahlberg, a formerly-prestigious northern city brutally massacred by the Horde, he voiced more altruistic views: he "detested the sight of scars left upon the world at the hands of the Nemesis". Kain gained the favor of King Ottmar by restoring his daughter's soul, and rejected command of the Lion Throne, asking instead that the King combat the legions in the Battle of the Last Stand. Ottmar agreed, and the two armies soon met.[BO1-C9]

"In the distance, I saw the Nemesis armies march forward, a black tide that would soon wash over the Armies of the Hope."
―Kain — Listen (file info)[src] 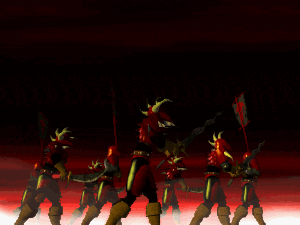 The legions encroach on Ottmar and Kain's Army of Hope. 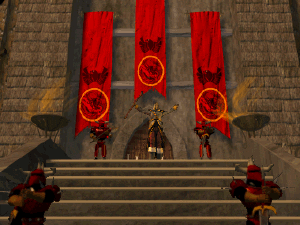 Early legion troops in the pre-Blood Omen era, with Moebius.

The Army of Hope was spirited, but the conflict proved somewhat one-sided. The legions easily overwhelmed their opponents, killing Ottmar in the fray. With his dying words, the King pleaded to the vampire that "the Nemesis must be destroyed. For my daughter, Kain; for the world". Kain was pessimistic as the Hope army fled into the forests, recognizing that Nosgoth now lay in William's hands. He prevailed northwards, but was soon cornered by Nemesis warriors.[BO1-C9] His only means of escape - a time-streaming device he had discovered earlier in Avernus Cathedral - activated, shuttling him into the past.[BO1-C9][BO1-C8]

He found himself in a pastoral Nosgoth, fifty years before the Battle of the Last Stand.[BO1-C10][SR2] Kain "seized the opportunity" to eliminate the Nemesis whilst he was still the boy-king William the Just, thereby preventing the legions from ever existing.[SR2-C5][BO1-C10] He witnessed Moebius the Time Streamer, the corrupt Guardian of the Pillar of Time, orchestrating the legions' creation by rallying crowds against Nosgoth's vampires, and providing the young William with the legendary Soul Reaver sword.[SR2-C5][BO1-C10][3] For "over forty years", Moebius was fated to influence and conspire with William, ensuring the future devastation of the land.[1]

With his own incarnation of the Soul Reaver from the Blood Omen era, Kain battled the young William.[BO1-C10][SR2-C1] The presence of the two blades triggered a Reaver-convergence, compromising the time-stream and enabling history to be rewritten. William was killed, and the legions were expelled from time.[SR2-C5][BO1-C10] Kain's jubilation was short-lived, though, as he returned to the present only to discover that "the entire affair [had] been carefully orchestrated by Moebius" - the Oracle of Nosgoth himself. In this new timeline, William's murder had given Moebius the catalyst necessary to change the nature of the destruction prescribed by history, suiting his own ends - "to ignite a genocidal war" against the vampires. Kain had "become the author of [his] own species' extinction": he had "destroyed a tyrant only to create one far worse".[SR2-C5][BO1-C11]

"I found myself once more in the Nosgoth I knew. The carnage from battle was gone. Yet there was something amiss. From the distance, I heard cries and a breeze from the south carried with it the faint odor of vampire blood."
―Kain — Listen (file info)[src]

The legions were created by William and Moebius, with William consistently identified as their leader.[1] No other commanders, named or otherwise, were mentioned.[BO1]

The soldiers serving William were referred to as Nemesis warriors.[4] Several classes existed, differentiated by their helmets and the combinations of weapons they wielded. Certain classes mainly guarded the stronghold of William the Just and the Land of the Nemesis, while others were more commonly sighted in regions further afield and in the Battle of the Last Stand.[BO1][5] Some were distinctly stronger and more durable than their counterparts, but no army hierarchy was clearly defined beyond a suggestion that "the best guards protect the stronghold".[5][6]

The legions were characterized as zealously devoted to their king, brutal and immoral, particularly when contrasted against the Army of the Last Hope. They were "fanatically loyal and ruthless" - harbingers of unending "rape and torture, death and destruction on cataclysmic levels".[1] Their banners and standards consisted of combinations of deep red and black, with emblematic animal motifs such as the bull, the dragon and the Falcon Insignia.[BO1][DEF-C3] Legion soldiers camped in militaristic tents, and wielded cruelly sharp weaponry.[BO1] Even so, they were fundamentally "human", and vulnerable to several of Kain's tactics. Combinations of the Flesh Armor with the axes, or the Wraith Armor or Chaos Armor with the Spiked Mace, were viable.[6]

Nosgoth's citizens were widely aware of the legions, or at least of the "unrest" and menace they had engendered, by the Blood Omen era.[SR2-C5][2] In Stahlberg, bloodied villagers had been impaled and shackled outdoors, their homes mottled and ravaged. In the Battle of the Last Stand, the Nemesis troops freely beheaded and crucified the Lion Throne warriors. They scrawled the words "death to Ottmar" on their enemies' discarded flags, and collected piles of the Hope soldiers' bloody, dismembered heads. On the battlefield, two dead Nemesis warriors are seen impaled by legion banners, with the word "traitor" scribbled on both standards in blood. This may imply that a degree of dissent had built up among some echelons of the army.[BO1-C9]

William and the legions ultimately vied "for global domination and the slavery of right thinking folk".[1] Moebius himself presumably had ulterior motives in ensuring their creation. Disguise Form dialogue suggests that William may have intended to "do something about the vampires" of Nosgoth, in line with Moebius's speech and personal desires, albeit not to the accelerated extent of the purges under Moebius's mercenary army.[2][SR2-C2][SR2-C3][DEF-C12] For this reason, Moebius may have considered them disposable when orchestrating the paradox which led to their elimination. The expulsion of William and the legions of the Nemesis from history confirmed to Kain that history was, to some degree, mutable.[SR2-C5]

One extra class of Nemesis warrior - the standard-bearer - was created for Blood Omen: Legacy of Kain, and included in the game's data.[5] However, they do not appear anywhere in the final product, for unknown reasons. They possess no attack animations, signifying that they were probably non-combative. Unlike the Army of Hope standard-bearers (also cut), Nemesis standard-bearers are not even seen as corpses in the in-game Battle of the Last Stand, but they are witnessed in the cinematic preceding it.[BO1]

Rendered images of the legions of the Nemesis were used fairly ubiquitously to promote Blood Omen: Legacy of Kain during its original release. The cover image of the Microsoft Windows port of the game is one example (although the Nemesis warrior appearing in its full iteration was cropped out of the final box art).[BO1]

Some of the symbolism associated with the Nemesis legions is evocative of Nazi Germany, such as the Falcon Insignia.[BO1-C9] Silicon Knights' developer diary, The Complete Guide To Legacy of Kain, confirms that Adolf Hitler and the Nuremberg rallies influenced Moebius's character and the scene where he rallies William's peasants respectively.[7] Nazism was later drawn upon again to inspire the creation of the revived Sarafan of Blood Omen 2.[BO2-C3]