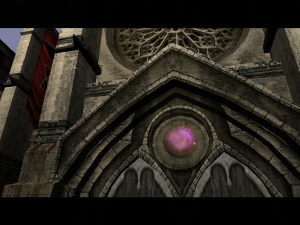 A Light Crystal outside the Sarafan Stronghold

"Alone now, I surveyed my surroundings and noticed a second time-streaming chamber, its entrance identical to the first, but with one distinction.
That crystal was significant, but how I had not yet discovered."
―Raziel — Listen (file info)[src]

Light Crystals were an elemental projectile target switch that could be used to operate mechanisms or open doors that was featured in Soul Reaver 2. Once Raziel gained the Light Reaver he could fire Reaver bolts that were attuned to activate them, allowing him to open new areas and progress in puzzles.

Light Crystals were featured in Soul Reaver 2 and were first encountered by Raziel shortly after the beginning of the title in A Reaver in Time where Raziel exited Moebius's Time Streaming Chamber in the Circle's gathering-room within the Sarafan Stronghold and noticed a second time streaming chamber that was locked and decorated by a distinctive crystal. As Raziel left the stronghold he would note another crystal above the large outer 'dock' doors to the building.[SR2][SR2-C1]

Ultimately Raziel was unsure of their usage until he was able to gain the Light Reaver in the Light Forge chapter, at which point he discovered that the Reaver Bolts of the Light Reaver were able to activate the Crystals and unlock these doors. Thereafter Light Crystals were a frequent part of puzzle sections of the game and could often be found within forge areas.[SR2][SR2-C4]

Most significantly Light Crystals were used by Raziel to both re-enter the stronghold via the dock doors in A Fateful Meeting and Blade of Vengeance, to enter the second time-streaming chamber in A Fateful Meeting, to spawn the three colored hearts from their puzzle room altars in the Air Forge chapter, drop special drawbridges in the puzzle to ascend Janos Audron's Retreat and to drain the Blood from the Fire forge in Vampire Interview.[SR2][SR2-C5][SR2-C6][SR2-C8][SR2-C9]

With the removal of Reaver bolts from Legacy of Kain: Defiance, Light Crystals were not seen in further games - although similar switches activated by regular (non-elementally attuned) telekinetic powers were present in both Blood Omen 2 and Defiance[BO2][DEF]