The Long Sword was first found in the Smuggler's Den in the hands of Sarafan guards, it had medium speed and power and had a greater range than the Club and Dagger. The Long Sword's Stealth kills included slitting the victim's stomach and driving the sword through the back of the skull so it protruded through the mouth. Grab Attacks included pommeling the victims face and impaling them[BO2]. 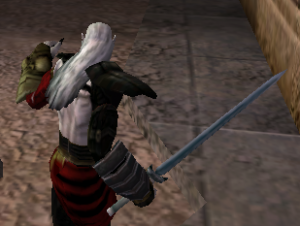