"I failed you. I tried to kill him. Even now I cannot remember how he defeated me. I was struck down, helpless at his feet. And then through his foul magic he took my mind, and transported me here, to this hellhole."
―Magnus[src]

Magnus is a major character in Blood Omen 2. One of the generation of vampires sired by Vorador, Magnus was originally among the highest ranking vampires in Kain's vampire army(Kain called him "my champion"). Magnus left Kain's camp the night before the battle of Meridian, attempting to assassinate the Sarafan Lord and end the war; unfortunately Magnus was defeated, his 'mind stolen' and he was transported to the Eternal Prison. Kain assumed that he, like many other vampires, had betrayed him.[1]

When Kain returned two centuries later, Magnus had become mutilated in addition to his insanity (a fact that prevented his identification until his memory returned), he was the fourth boss character that Kain faced at the end of Bad Blood.[2][3] Kain killed Magnus in the Eternal Prison, obtaining the Dark Gift Immolate. Magnus was voiced by Rodger Bumpass.

Magnus was encountered only in the fourth timeline that gave rise to the events of Blood Omen 2. As such, he was either sired by Vorador or one of his descendants sometime between the Collapse of the Pillars and the Rise of Kain's Vampire Army.[4] When the army rose to power and began to conquer Nosgoth, Magnus served as Kain's 'champion' and was likely highly ranked in the army,[1] but the night before the battle of Meridian, Magnus secretly left Kain's camp, attempting to kill the Sarafan Lord alone and end the war. The Sarafan Lord however, was too powerful for Magnus, he defeated the Vampire and used his "foul magic" to strip him of his sanity and transport him to the Eternal Prison, where Magnus would be trapped, imprisoned and tortured for the next two centuries.[1] Kain, seeing that Magnus had left his camp the night before the battle, assumed that like many others, Magnus had betrayed his cause.[1]

Two centuries later, Kain returned and in Bad Blood, he travelled to the Eternal Prison,[5] seeking the Builder and a way of destroying the Device. As he passed through the prison, Kain entered a special 'wing' where several sadistic tortures took place on prisoners; and witnessed a wretch attempting to flee from a powerful Vampire (later revealed to be Magnus)[BO2]. The Vampire, clearly insane, was also heavily mutilated with several areas of skin and flesh had been removed, showing areas of his brain and other internal organs; he also carried a large heavy-looking furnace on his back, which to a certain extent appeared to be embedded within him.[6][7] 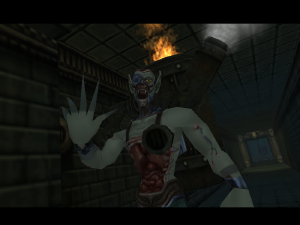 Magnus as he appears in game

The Vampire demanded an allotment of meat and attempted to attack the wretch, but as he approached, two Prison guardians appeared to protect the wretch and the vampire took his meat allowance from them instead. Throwing the wretch, the insane vampire was able to break the glass between himself and Kain and set about attacking the other vampire. Kain discovered that he could not overpower the insane vampire; finding him to be virtually invincible; instead Kain found a way to trick the vampire, by using Telekinesis to activate a Glyph seal, raising a platform and dropping the Insane Vampire into a pit of water.[6][7]

The deranged Vampire would not be so easily defeated though; and on two occasions as Kain passed through the torture area, the vampire appeared behind some bars, attacking restrained Eyeless wretches, appearing to follow Kain.[8] When Kain left the torture area, Magnus was still following Kain, breaking through some closed doors to attack him. Once again, Kain was able to outwit the mad vampire, this time using Telekinesis (BO2) to activate a Glyph seals and 'drop' the bridge, submerging Magnus in water again.[9] After Kain met the builder, Magnus was still following him and Kain was once again confronted by the Vampire in a narrow corridor when the lights went out; Kain was again able to lure Magnus onto a bridge and dropping it was able to immerse him in water.[10] As Kain progressed Magnus returned to taunt Kain as he negotiated an 'invisible' maze[BO2].[11] When Kain reached the end, the insane vampire confronted Kain.[12][13]

During the battle, Kain was able to topple a giant statue of Moebius onto Magnus,[14] which restored Magnus' memory[15][BO2]. Magnus asserted that he had not betrayed Kain before the battle of Meridian; and had only sought, in his pride, to end the war quickly.[1] Realising Magnus' loyalty, Kain gave him a compassionate death,[16] absorbing the Dark Gift Immolate from his veins.[17] 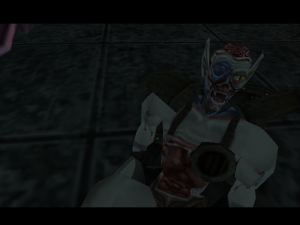 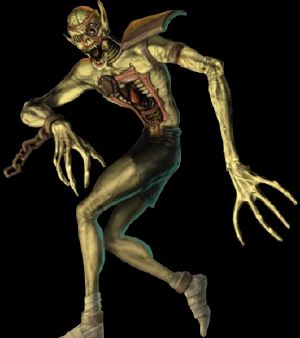