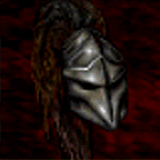 Malek's Helmet as it appears in Blood Omen: Legacy of Kain

"Malek's helmet, crowned with a plume of braided hair, torn from the scalps of his victims."
―Kain — Listen (file info)[src]

Malek's Helmet was a piece of the armor worn as headgear by Conflict guardian Malek throughout his lifetime. The helmet was gifted to Malek by the Pillar of Conflict and was represented as his Pillar token in Blood Omen: Legacy of Kain before being briefly revisited in both Soul Reaver 2 and Legacy of Kain: Defiance. The helmet was adorned with braided hair torn from the scalps of Malek's victims.

"I found Malek's helmet amongst the scattered remnants of his armor, whole and intact. Vorador had finally laid his old adversary to rest."
―Kain — Listen (file info)[src]

Malek's helmet first appeared in Blood Omen: Legacy of Kain where Malek wore the helmet in all his appearances and the headgear was significantly treated as Malek's pillar token and was thus necessary to restore the Pillar of Conflict.[BO1] The helmet was first seen during the Sarafan crusades in Nosgoth's early history, where Malek was shown confronting Vorador after his Slaughter of the Circle in the Circle's gathering-room, but was defeated by the elder vampire.[BO1-C1] 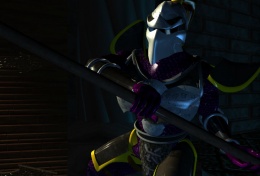 Malek wearing his helmet at the Slaughter of the Circle

Following his defeat at the hands of Vorador, Mortanius ripped Malek's soul from his flesh and bound it into the armor he had so gruesomely decorated as punishment for failing to protect the Circle of Nine.[BO1-C1] For the next five hundred years Malek served the Circle as an animated suit of armor until the rise of the fledgling vampire Kain in the Blood Omen era. When Kain began his quest to murder the corrupted Pillar Guardians and thus restore the Pillars of Nosgoth, Malek as "protector of the circle" was an early adversary and Malek, now fused to his armor would carry his helmet in all his appearances: It was present in Nupraptor (chapter) in Nupraptor's Retreat when Malek appeared to protect Nupraptor,[BO1-C3] in The Hunt for Malek when Kain confronted Malek in his bastion[BO1-C4] and was seen in flashbacks to Nosgoth's early history and the Slaughter of the Circle in Find the Oracle and Vorador's Mansion (chapter), when Kain consulted Moebius (in the guise of the Oracle) and enlisted the help of Vorador respectively.[BO1-C5][BO1-C6]

The last occasion the helmet would be seen was in Threaten the Circle, when Kain travelled to Dark Eden to defeat the Dark Eden triad of Bane, DeJoule and Anarcrothe. When Kain arrived, Anacrothe immeadiately summoned Malek to defend them and fled. In combat with his old nemesis once more, Malek allowed Kain to pursue the Circle while he engaged Vorador in battle. Through means unknown Vorador defeated Malek and destroyed whatever held his soul-bound armour together. When Kain returned victorious he found Malek's armour empty and lifeless.[BO1-C7] 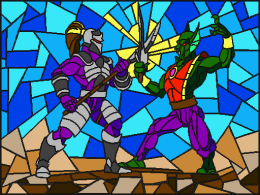 The Stained Glass in Avernus depicting Malek and Vorador

Kain claimed Malek's Helmet as a token of power and returned with it to the Pillars of Nosgoth. Kain placed the Helmet before the corrupted Pillar of Conflict, the Pillar accepted its offering and was, for a short time, restored.[BO1-C7] After Malek's death and the dissolution of his pillar token one further image of the helmet would be seen as in Defeat Azimuth, whilst investigating the Great Cathedral at Avernus, Kain passed beneath a massive stained glass depicting the Slaughter of the Circle and Vorador's conflict with Malek.[BO1-C8]

"The Helmet of Malek, I placed before the Pillar of Conflict."
―Kain — Listen (file info)[src]

"The pillar accepted its offering, thus it was restored."
―Kain — Listen (file info)[src] 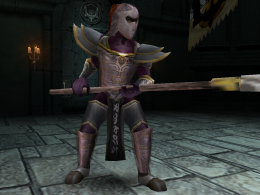 Malek and his helmet in Soul Reaver 2

Malek's Helmet would continue to be seen in different capacities in both Soul Reaver 2 and Legacy of Kain: Defiance, both in eras while Malek continued to live and use the helmet as his armor. In Soul Reaver 2, Malek himself was seen during the Sarafan crusades in Nosgoth's early history, when he and Moebius briefly confronted Raziel in the Sarafan Stronghold during the course of Blade of Vengeance. Here Malek's helmet and weaponry were presented along with the paladin, however they were ultimately unobtainable and unusable, acting simply as the clothing of Malek himself.[SR2][SR2-C9]

For Defiance, set a short time after, Malek did not appear but his likeness had been memorialized in a statue in the Cloister of the Sarafan Stronghold. Malek's helmet was among the items featured in this depiction, though this version of the item was again unobtainable and unusable.[DEF][DEF-C1][DEF-C3]

"Malek, the great Sarafan warrior. I had met him before. His sword and shield seemed to have gone astray."
―Kain[src]