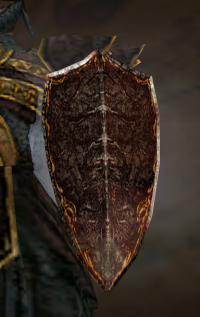 "Malek’s missing shield. I hated to restore his dignity, but I would need to return this to his monument before I could progress."
―Kain[src]

Malek's Shield was an artifact used by Kain in Defiance. It could be found in Pursue Moebius.

When Kain returned to the Sarafan Stronghold in Chapter 3 of Defiance, he noticed a new statue of Malek in the 'cloister' courtyard and noted that the statue was missing a sword and a shield (further evidenced by a nearby mural depicting Malek with both, and two Sealed Doors depicting bearing images of a sword and a shield respectively).

As Kain moved through the stronghold he used the Falcon Insignia to open the way to the upper levels of the chapter house and sanctuary area, finding his way to the relic room. In this chamber he found another empty- handed statue of Malek, but by moving a nearby block and triggering a floor-pad mechanism, the statue revolved revealing an identical statue holding Malek's Shield. Returning the shield to Malek's statue in the cloister dispelled the barriers protecting the 'Shield Mural' door, allowing Kain to ascend to the upper levels of the 'cloister' courtyard and the 'main battlements' area, where he found a second statue of Malek holding Malek's Sword.