The Material Reaver was the Wraith Blade's Material Realm manifestation, the blade featured in Soul Reaver, Soul Reaver 2 and Legacy of Kain: Defiance .

When Raziel originally gained the Wraith Blade in Legacy of Kain: Soul Reaver, it effectively had two companion enhancements; the green Spectral Reaver and the blue Material Reaver, with the Material Reaver the default manifestation of the blade in the Material Realm. In Soul Reaver the Material blade would only manifest when Raziel was at full health in the Material plane. Once manifest, it was noted for sustaining Raziel's own Material manifestation; preventing his health from being depleted unless he took damage from combat. In combat, the blade was more powerful than other standard weaponry and was able to execute a 'charged' fatal blow on stunned enemies. The Material Reaver could be used to open certain Sealed doors, enhanced with the Telekinetic force projectile relic to produce Reaver bolts and also optionally be imbued with elemental Fire, creating the Fire Reaver[SR1][1][2][3]. 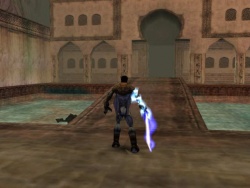 The Material Reaver in Legacy of Kain: Soul Reaver

The blade returned in Soul Reaver 2, where it acted in much the same manner initially; only manifesting in the Material Realm when Raziel's health was full. Shortly into the game however, the Wraith blade grew in strength after meeting its former self in William's chapel. After this incident the Material Reaver could be summoned and dismissed at will, but this had a price as in combat the Reaver's would gradually fill the Reaver bar which encircled Raziel's Health spiral, increasing the power of the blade tremendously but devouring the Souls of its victims before Raziel could feed and eventually turning its hunger on Raziel when completely filled. As in Soul Reaver, the blade could also be used to open certain Sealed doors, fire Reaver bolts and also be imbued with several elemental powers.[SR2][4][5]. 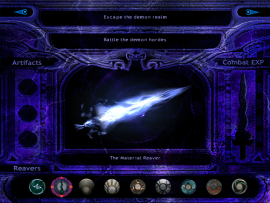 The Material Reaver in the Defiance inventory