"My brother, Melchiah, was made last, and therefore received the poorest portion of Kain’s gift. Although immortal, his soul could not sustain the flesh, which retained much of its previous human frailty. This weakness, it seemed, was passed on to his offspring. Their fragile skins barely contained the underlying decay."
―Raziel[src]

Melchiah was a major character in the Legacy of Kain series, featured in Soul Reaver and Soul Reaver 2. Initially born as a Human in Nosgoth's early history, Melchiah rose to become one of the elite Sarafan Inquisitors of the Sarafan. Melchiah was killed by the time travelling Wraith Raziel and buried in the Tomb of the Sarafan for a thousand years before Kain raised him as sixth and last of his Vampire sons. Melchiah in turn raised his own Vampire clan, the Melchahim, who participated in the conquest of Humanity. In Kain's empire, Melchiah was one of the leading 'Council', but he did nothing to prevent his Vampire 'brother' Raziel 's execution. After Raziel returned as a Wraith, Melchiah was the first of his former brothers that he faced. Melchiah was voiced by Michael Bell. 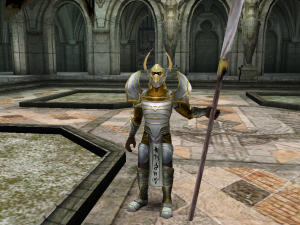 Melchiah was born as a Human at some point in Nosgoth's early history. He would go on to join the Sarafan, eventually reaching the highly respected rank of Sarafan warrior inquisitor, one of the order's elite. Melchiah infiltrated Janos Audron's aerie along with his comrades (Human Sarafan Inquisitors Raziel, Turel, Dumah and Zephon) and assisted in Janos' murder (the group having been led to Janos by a time travelling Wraith Raziel from the Soul Reaver era). Tearing out the Heart of Darkness from Janos' chest and taking the Reaver blade, the Sarafan retreated to their stronghold.

Janos' murder had dire consequences for Melchiah, as the Wraith Raziel followed the Inquisitors back to the Sarafan Stronghold to avenge Janos' death and reclaim the Heart of Darkness, attacking the Stronghold at the same time as Vorador's legendary attack on the circle (at the same location and with the same motivation). In the chaos, Wraith Raziel was able to recover The Reaver and shortly afterward Melchiah confronted the Wraith Raziel, along with his brother Zephon, in the courtyard of the stronghold, telling Raziel to get "back to hell". As The Reaver had made him virtually invincible, Raziel was able to easily kill Melchiah (along with Zephon), see also Melchiah and Zephon. Melchiah was entombed with the other 'martyr' Sarafan Inquisitors for a millennium in the Tomb of the Sarafan.

When Kain discovered a method of creating Vampires for himself, he raised the six Sarafan martyrs to serve as his Vampire sons; breathing part of his Soul into them to 'snare their souls' and reanimate their corpses (but keeping them ignorant of their previous Human lives). Melchiah was the last of the six to be raised and as such, he inherited the poorest proportion of Kain's gift; despite his immortality, Melchiah's body was unable to sustain its own flesh, forcing him to skin his victims and stitch their flesh onto him to "cover his putrescence." Presumably following Kain's method, each of his new lieutenants raised their own vampires, giving birth to the vampire clans (with Melchiah raising the Melchahim) providing Kain with an army with which to conquer Nosgoth. In Kain's New Empire, Melchiah was one of the members of the council which ruled Nosgoth, with Kain as their only master.

Melchiah served Kain and the council for roughly a thousand years and over the centuries Melchiah gained many new gifts along with his 'evolution', but his underlying decay continued. Melchiah was present at the Council meeting where Raziel revealed his wings and he also witnessed Raziel's execution at The Abyss. 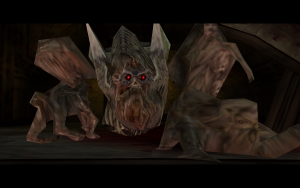 Over time, with Nosgoth slowly becoming a wastleland, Kain's Empire declined and the clans scattered, with Melchiah (and the Melchahim) retreating to their territory in the Necropolis. Melchiah would eventually devolve into a large bloated mass, his underlying decay covered by a patchwork made up of the skins of his vicitms.

When Raziel returned five centuries later, he visited the Necropolis after he had passed through his own desolate stronghold. Assailed by the 'zombie-like' Melchahim, Raziel was eventually able to locate Melchiah's chambers, alongside a giant bladed 'grinder'. Raziel confronted his 'younger brother', asking him of the fate of the Razielim, Melchiah called them "an upstart inheritance" and said Raziel was "the last to die".

Raziel fought Melchiah, eventually using Melchiah's phasing ability against him to trap him in the grinder (see also Melchiah (boss)). Activating it, Raziel demanded to know the location of Kain, but Melchiah told him that Kain was "beyond [his] reach" and only made himself known when "he [saw] fit, not when commanded", before being crushed by the grinder. As he died, Melchiah, who had earlier showed revulsion at his (d)evolved form, expressed relief at his "release" and with Melchiah's death, Raziel was able to consume his Soul gaining the phase through gates ability required to enter the Sanctuary of the Clans.

Despite this victory and the Elder God's praise, Raziel was left conflicted by Melchiah's death; though he wanted to avenge himself, the idea of fratricide was still repulsive to him.[1]