"I recognized these two as my former brethren... in life, as Sarafan; and in unlife, as Kain's vampire 'sons'.
Melchiah and Zephon, the weakest of Kain’s brood... These bastards had no idea what future lay in store for them – how they would become the very thing they so despised.
The Reaver hummed with ravenous anticipation – Janos had called it a 'vampiric' blade, endowed with the power to drain its victims of their lifeblood.
I was eager to see what the Reaver would do to these two..."
―Raziel — Listen (file info)[src]

In the final areas of Soul Reaver 2, shortly after retrieving the Reaver, Raziel faced the Sarafan warrior inquisitor Melchiah along with comrade Zephon in combat. The battle took place in the Courtyard area of the Sarafan Stronghold. 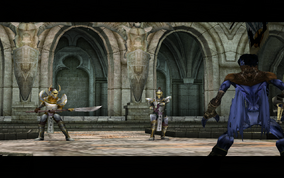 Raziel encounters Melchiah and Zephon in the Cloister

After witnessing the death of Janos Audron at the hands of the Sarafan warrior inquisitor group,[SR2][SR2-C8][SR2-C9] Raziel pursued them as they retreated to the Sarafan Stronghold carrying with them the Heart of Darkness and Reaver blade. Infiltrating the stronghold, Raziel was able to recover the Reaver during a brief confrontation with Malek and Moebius but soon found himself channeled into combat with the inquisitors themselves.[SR2][SR2-C9]

When Raziel reached the Cloister area, portcullises sealed the exits and he was he was confronted by the first pair of inquisitors - Melchiah and Zephon. Unlike other 'boss' battles in the series, the battles with the inquisitors had no puzzle aspect to them and were treated the same as any regular combat encounter - albeit against incredibly powerful opposition and with Raziel invincible due to the effects of the Reaver.[SR2][SR2-C9]

At a distance all the inquisitors would walk slowly, while in direct combat Melchiah had power, speed, health and defensive capabilities far exceeding that of ordinary enemies. Armed with a pike, Melchiah was a mid-range fighter (broadly comparable to Sarafan warrior pikemen, though with an extended range due to the longer pike weapon), attacking viciously and often with a series of jabbing and sweeping strikes, frequent lunges and relentless blocking, but also being somewhat vulnerable to counters and lunges himself. Appearing together with Zephon also allowed Melchiah to double-team Raziel, preventing any offensive maneuvers on his part. With Raziel's Health coil sustained by the Reaver, any damage was healed almost immediately, making the defeat of the inquisitors inevitable. Upon Melchiah's death his soul was released but quickly rose away, and when both inquisitors were defeated Raziel reflected on the Reaver's new-found power to make him invincible before heading further into the stronghold and confrontations with the other inquisitors.[SR2][SR2-C9][1] 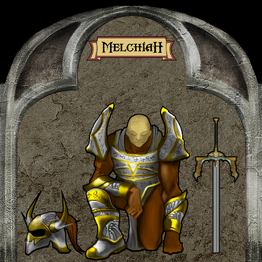