Mercenaries were an enemy class encountered by Kain in Blood Omen 2 . They were seen in Chapter 6: The Industrial Quarter, Chapter 7: The Canyons and were later briefly seen guarding the Wharves in Chapter 10.

A similarly attired female Mercenary variant would later be encountered in Chapter 7:The Canyons,[3] following the Merchant trading carts and attempting to protect them from attack by Smugglers (and Kain)[BO2]. Mercenaries (the male variant) were also one of the enemy classes encounterd (briefly) in Chapter 11 in the diversely populated Wharves[BO2][4]

Though they were not as heavily armored as other Sarafan troops, Mercenaries were better armed and stronger than regular Sarafan guards[BO2], despite apparently lacking the discipline of their Sarafan counterparts.[1] male Mercenaries were armed with a Scimitar and female mercenaries with an axe[BO2]. 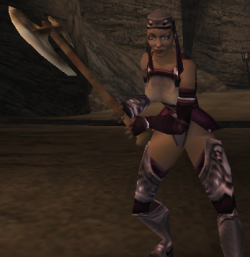