Meridian was a city in Southern Nosgoth. In the Post-Blood Omen era, Meridian was the political and industrial capital of Nosgoth,[BO2-C1][1][2][3] One of the finest and largest cities in Nosgoth, it was also a port city and bordered the Great Southern Sea. Much of Blood Omen 2 was set in Meridian.

Meridian was a large walled[BO2-C6] city in southern Nosgoth, it was located south-east of Freeport and south of the Pillars of Nosgoth,Ziegsturhl, Provance and the Great Southern Lake. The city was also surrounded by many natural boundaries and was bordered to the west and south by the Great Southern Sea, to the east by a mountain range and to the north by a set of Canyons that apparently isolated Meridian from the rest of Nosgoth.[4]

Although little is known about Meridian's layout prior to Blood Omen 2, it appears to have been much smaller and simpler in earlier times, with expansion presumably driven by the Glyph magic-powered 'industrial revolution' of Meridian. By the time of Blood Omen 2, the city had become much more complex and 'labyrinthine'[BO2-C1] and had grown onto a nearby peninsula and some nearby islands, with a large wall surrounding the main parts of the city.[4] 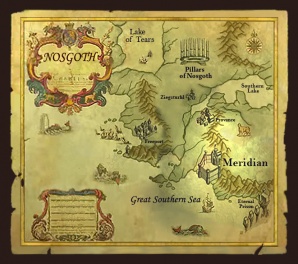 Meridian in relation to southern Nosgoth

At this time, the city was divided into separate parts:

Other major locations in Blood Omen 2 were explicitly identified as outside Meridian, but close-by; with the Canyons cutting through the eastern mountain range immediately to the 'North' of the city[BO2-C6] and the Eternal Prison apparently to the 'South', where the mountain range met the Great Southern Sea (see notes).[4] The Wharves of Meridian also provided the only known access to the Hylden City, which was presumably situated somewhere westward across the Great Southern Sea.[BO2-C9] 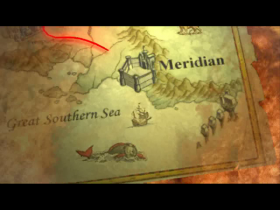 Meridian as the target of Kain's vampire army

The known history of Meridian starts nearly two hundred years after theCollapse of the Pillars of Nosgoth, by which time the city was already a base for the Hylden incursion into Nosgoth, with the Hylden Lord in the guise of the Sarafan Lord and holding power over the Human vampire hunting Sarafan. (at this time the city was shown in maps as consisting simply of the Sarafan Keep[4]). With the rise of Kain's vampire army, the Sarafan and the Vampires clashed for many years for domination of Nosgoth,[1][2] until the final battle of the war took place alongside the Sarafan Keep. In the battle, Kain was betrayed by Sebastian, who set up a Sarafan ambush that cost him the war. The vampire army was scattered by the Sarafan with the aid of their new Glyph magic[BO2-C1] and Kain himself (unable to use the power of the Soul Reaver due to the interference of the Nexus Stone held by the Sarafan Lord) was defeated by the Sarafan Lord and thrown off a cliff to his apparent death.[BO2-C1] Kain's unconscious body would be recovered by agents of the Cabal.[1][2]

With Kain's army defeated, the Sarafan triumphed in the wars and the order conquered Nosgoth and began hunting down the remaining vampires. Meridian as the base of the order (and with its secret links to the Hylden City) likely grew in status, becoming the capital city of the Sarafan Order's Nosgoth.[BO2-C1][1][2][3] In the two hundred years that followed, technological updates (possibly aided by some of the applications of Glyph magic) and industrialisation, resulting in the rapid growth of Meridian and it becoming a highly urbanised environment.[4][BO2-C1] During this time, Glyph magic saw widespread use; originally used to hunt and combat the remaining vampires,[BO2-C1] the technology was adapted to provide a number of applications and benefits to the people, such as lighting, heating and operation of machinery - the technology was even seen used in the same manner as electricity. 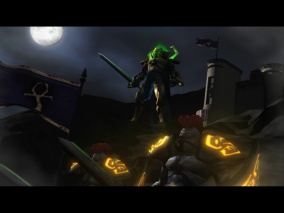 Over time, the relationships between the humans and the Sarafan became strained in Meridian. The initial warm response faded away as Sarafan rule revealed itself to be extremely fascistic[1][2] and humans found conditions diffiicult under their "iron rule";[3][BO2-C1] Kain could often overhear humans expressing dissent to each other in private and more infrequently, in public, about the Sarafan rule.[BO2-C1][BO2-C3] The Vampires who had survived the genocide at the end of the wars (and were not in service to the Sarafan) had banded together to form the Cabal and organised a resistance to the Sarafan rule, but with vampires numbers greatly depleted by the war and subsequent vampire hunts,[BO2-C1] the Cabal was forced to use the support of many disaffected humans.[BO2-C1] Ultimately seeking to eliminate the Sarafan Lord and overthrow the order, The Cabal remained in Meridian,its headquarters hidden under the Blue Lady Curios shop in the Lower City.[BO2-C3]

Two Centuries after the battle of Meridian, with vampire numbers down to just a handful of known faces, the Cabal was forced to resurrect Kain[BO2-C1] as a perfect agent for the resistance.[1][2] As Kain worked for the Cabal he explored much of Meridian, uncovering Sanctuary in the Lower City, rescuing Umah from the Sarafan Keep and stealing the Nexus Stone from the Industrial Quarter. Eventually Kain descended into the Device at the heart of the city and uncovered the Hylden conspiracy behind the Sarafan Order, killing the Mass Kain was able to destroy the Ancient Hylden weapon. After infiltrating the Wharves of Meridian, Kain made his way to the Hylden City and killed the Sarafan Lord, closing the Hylden Gate and preventing a Hylden invasion of Nosgoth. The fate of Meridian after this time remains unknown, though it seems likely Kain would return to the city to crush the remains of the Sarafan Order[BO2-C11] or (as Umah feared) the Cabal.