Moebius's champion was a minor antagonist in Blood Omen: Legacy of Kain. He was one of the enemies who fought during Kain's confrontation with Moebius at the vampire hunters' keep, summoned as a representative of the present day to fight for the Time Streamer. 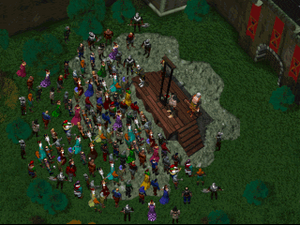 After the fledgling vampire, Kain, returned to the Blood Omen era upon altering history, he discovered that his actions in the pre-Blood Omen era incited a genocidal hatred of vampires throughout all Nosgoth. Moebius, the Time Guardian, orchestrated a vampire-hunting crusade through his mercenary army. By the time Kain approached the vampire hunters' keep to confront Moebius, the mercenary army had already captured the elder vampire Vorador. Moebius stood before a large crowd, on a rudimentary wooden scaffold, with his champion and the leader of the vampire hunters.[BO1-C10][BO1-C11]

Kain watched as Vorador was beheaded, and prepared for battle when Moebius singled him out from the crowd as "the last". He fought off the citizens, and pursued Moebius through the keep. Moebius conjured several of Malek's Warriors as the "puppets from the past" to fight Kain. After their defeat, he called upon another puppet "from the present" – summoning his champion. The warrior brandished a whip-like implement, and tried to slay the vampire, but failed; Kain slew him. Kain then proceeded to the final area of the garrison, where he fought another puppet "from ages yet to come" – an enemy resembling himself – and subsequently killed Moebius.[BO1-C11]

Although not highlighted in The Complete Guide To Legacy of Kain, this vampire hunter is a unique NPC and boss, battled nowhere else in the game, with his own character sprite.[BO1] He makes only one other appearance, alongside Moebius and the leader of the vampire hunters during Vorador's execution cinematic.[BO1-C11] Blood Omen: Legacy of Kain: Official Game Secrets simply refers to him as "the champion [Moebius] summons from time".[1]