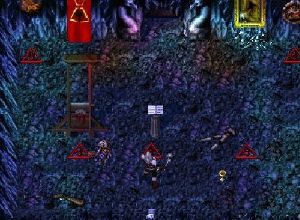 Moebius' Museum was a room within the Oracle's Cave, just before the Oracle's Chamber . It was visited as a playable location in Blood Omen: Legacy of Kain and Soul Reaver .

In Blood Omen, Kain passed through Moebius' Museum just before he reached the Oracle's chamber. The Museum was a collection of artefacts from different timelines that effectively foretold the mistakes that Kain would make on his quest. It contained two shields, a red banner, a guillotine, a doll a set of Sarafan armour and a book written about them

Each object would turn out to have relevance: The Book and the Armour were both Sarafan artefacts related to the Paladin Malek, who Kain was pursuing at this point. The Doll was the Dollmaker's Doll that Kain would later collect to help him enlist the help of Willendorf in the Battle of the Last Stand, indeed one of the shields bore the sigil of Willendorf and was apparently worn from that battle. The other shield and the Red banner bore the signs of Moebius Mercenary Army, and the Guillotine was the one used to behead Vorador (it was apparently still wet with his blood). The last three objects were retrieved from after the Reaver paradox that created the Second timeline and it's resulting change in the timelines.

Raziel was able to visit the Museum room inSoul Reaver, but all that was there was the tattered remains of Moebius' banner

The Museum does appear to 'bend' a few of the rules of time travel within the series (as history is rewritten), although if anyone had that power, it was Moebius.

The Museum also contained some unexplained objects; there was a golden picture on the wall, which had what appeared to be skeletal remains beneath it; there was also a golden chalice on the floor next to the armour (which may represent Vorador, given the cut-scene between Kain and Vorador); of most note however, is what appears to be a Shotgun, as this is the first and only depiction of a gun in the series, though there were canons in Soul Reaver 2.