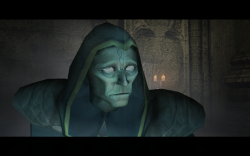 Moebius's spectre as it appears in Soul Reaver 2.

Moebius's spectre, or Moebius's martyred spirit, was an entity encountered by Raziel at the Sarafan Stronghold, in the post-Blood Omen era of Soul Reaver 2 in A Fateful Meeting. Though it purported to be the soul of the late Moebius the Time-Streamer, it was, in fact, simply an illusion conjured by Moebius to influence Raziel against Kain.

"No charade, Raziel. Only the entreaties of this martyred spirit."
―Moebius — Listen (file info)[src] 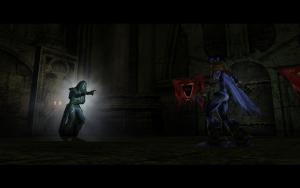 The "martyred spirit" argues with Raziel.

Following his history-altering encounter with Kain in the pre-Blood Omen era, Raziel found Moebius in the Sarafan Stronghold's Circle's gathering-room, and ordered the Time-Streamer to send him to an era prior to the Sarafan vampire purge. However – aggrieved that Raziel had spared Kain's life, thus hindering his plans – Moebius deceived Raziel by instead conveying him to the post-Blood Omen era. He emerged from one of the Stronghold's time-streaming chambers to find himself in Nosgoth's future, the building now derelict and abandoned.[SR2-C5]

Raziel pressed on, fighting demons and demon hunters, and found a statue in the Sanctuary commemorating Moebius's execution of Vorador in the Blood Omen era – which, in its own right, provided evidence that Moebius was long since dead in this time period, having been beheaded by the fledgling Kain immediately after Vorador's death. On his exit, Raziel was accosted by a ghostly being which claimed to be Moebius's spirit.[SR2-C5][BO1-C11]

The spectre manifested in the Material Realm; they debated at some length on each other's actions in the pre-Blood Omen era, and the correct course for Nosgoth. The spectre argued that Raziel should have killed Kain to restore the land, and was therefore culpable for releasing "a multitude of horrors upon this world". Raziel rebuked this with the logical conclusion that killing Kain's later self would not have done anything to prevent the collapse of the Pillars, which was the main catalyst for Nosgoth's decay.[SR2-C5][1]

Raziel voiced his suspicion that Moebius was motivated by fear: "now that [Kain]'s survived, you have no idea what's coming, do you? Maybe for the first time in your entire life. You're terrified that he may have truly found a third option out of the dilemma you orchestrated for him". He expressed skepticism that the entity even was a spirit, threatening to devour it, and it contemptuously vanished in response. In truth, he had been correct: the spectre was an illusion, created by Moebius to influence him.[SR2-C5][2]

Soul Reaver 2 offers no definitive answer as to whether or not the martyred spirit is genuinely Moebius's spectre, but Crystal Dynamics staff members Jennifer Fernández, Richard Lemarchand, and Kyle Mannerberg later confirmed in an interview at The Lost Worlds that "it was an illusion created by Moebius to influence Raziel".[2] 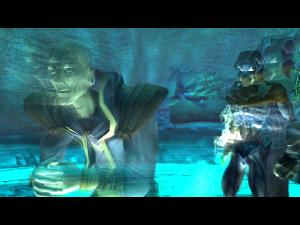