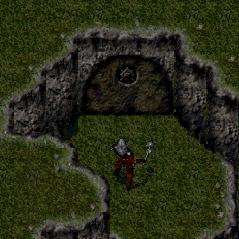 Kain in front of a closed Moon Gate.

Moon Gates were seen in Blood Omen: Legacy of Kain, they were Special Doors that only opened when it was a full moon.

Moon Gates are numerous in Blood Omen and hide many secrets. They took advantage of the games real-time system and were only open during nights (10pm-6am) of a full Moon (approx 1 in every 8 days game-time/1 in every 2 hours real-time.) There was a particularly large Moon Gate guarding the entrance to the Lost City .

The origin of the Moon Gates remains unknown and they have not been seen again in the series.

The Moon Gate at the door to the Lost City may imply that both have common architects.

Of the species observed in Nosgoth, both the Vampires and Werewolves appear to gain strength from night and a full moon and may be considered as likely creators; although their architecture does not necessarily match Ancient Vampires design. The Lightning passageway also takes a different angle with the problem as Werewolves may simply have entered the Moon Gates at their active times.