The martyred Nature Guardian[1] was one of the human Guardians of the Pillar of Nature, and a member of the Circle of Nine. She served the Pillars of Nosgoth during Nosgoth's early history, and presumably sponsored the vampire purge led by the Sarafan. She was among the six Guardians murdered by Vorador in his slaughter of the Circle at the Sarafan Stronghold. The Guardian appeared only as a minor character in Blood Omen: Legacy of Kain, but was also depicted in a Soul Reaver 2 mural.

The Nature Guardian was one of six who fell to Vorador's fateful attack.[SR2-C1][2] She was among four Guardians seen using the viewing basin to observe and guide the Sarafan campaign, alongside the then-Balance, Dimension, and Energy Guardians.[BO1][3] Of these four, she was the second of Vorador's victims; he impaled the unknown male Guardian with his Hybrid Sword, then fired an Energy Bolt spell at her, the nearest remaining Circle member. It knocked her to the ground violently and lingered over her body, resulting in death.[BO1-C1] She was succeeded - either directly, or later in Nosgoth's history - by Bane.[4] In the Blood Omen era, Moebius discussed the event with Kain, attributing the deaths to Malek's "vanity".[BO1-C5]

In another timeline's pre-Blood Omen era, Moebius displayed to Raziel that, following her death, the Nature Guardian was beatified in a mural adorning one of the gathering-room's walls, as too were her five slain peers. Moebius had seemingly utilized their deaths, along with the deaths of the Sarafan warrior inquisitors and the more recent killing of William the Just, to help incite his mercenary army's "humble crusade" against Nosgoth's vampires. Raziel could peruse her mural during his quest, which was still intact by the post-Blood Omen era.[SR2-C1][SR2]

When Raziel stormed the Stronghold in Nosgoth's early history to avenge Janos Audron, his own attack on the Sarafan warrior inquisitors coincided with Vorador's assault on the Circle. He encountered Moebius, defended by Malek, shortly after infiltrating the building. There, the trio could hear the future martyrs' distant pleas for help, and Vorador's taunts; it was in fact Moebius himself, instructing Malek to "hold fast" against Raziel despite Malek's protestations, who had delayed the Paladin from saving the six Guardians.[SR2-C9][5]

In the next timeline, Raziel encountered, and battled, the specter of the Nature Guardian's earliest predecessor - the original Nature Guardian - in the Fire Forge of the Vampire Citadel.[DEF-C6] 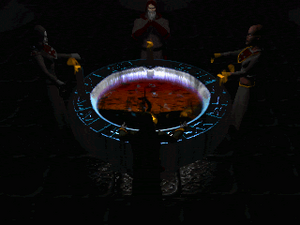 The Nature Guardian with three of her peers. 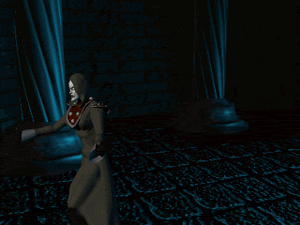 The Guardian backs away from Vorador. 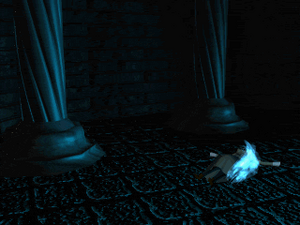 The Nature Guardian character definitively appeared in the introductory cinematic of Blood Omen: Legacy of Kain, but was referred to simply as a female "wizard" in Silicon Knights' scripts, and remains unnamed as of yet.[BO1-C1] She can be identified thanks to Soul Reaver 2, which evinces that only two female Guardians were part of the Circle of Nine at that time - the other being the distinctive Balance Guardian, also slain in the intro.[1] The Nature Guardian does not speak any lines, and hence has no corresponding voice actor.[BO1]

Soul Reaver 2 reintroduces the Nature Guardian through the Sarafan Stronghold's murals, illustrated by series artist Daniel Cabuco.[SR2][6] She is the only Guardian whose Pillar affinity can be deduced from her mural; her sash sports the Nature symbol, and represents the first instance of the symbol seen in the series' gameplay.[SR2] Official information passed on to Dark Chronicle, supplemented by comments from Cabuco at his personal forum, later matched the other five martyred Guardians to their respective Pillars.[1][3]

The Guardian's appearance differs significantly between Blood Omen: Legacy of Kain and Soul Reaver 2's depictions. In the former, she is garbed in a hooded brown robe, with a distinctive studded red collar - very similar in appearance to DeJoule.[BO1] Both of her arms are intact, in contrast to her Sarafan Stronghold mural in the latter game; here, her right arm is curiously withered and bandaged, with blood overtly seeping through a wound beneath. This particular detail remains unexplained.[SR2]

Her hair has a faint burgundy hue, adorned with a pale flower, and she wears a flowing purple and blue dress.[SR2] Daniel Cabuco initially intended to portray Vorador with a "nasty looking knife about to shank the Nature Guardian" in this image, but ultimately felt it was too harsh and removed the weapon. He later reflected that "in some ways it's worse because now he's got to do her in with his bare fangs". Her aureoled portrait in the mural appears to have been partially based on a concept for the pre-fallen Ariel.[6]

Though the extent of the Nature Guardian's powers are not witnessed in the series, her unique talents may have been akin to those of her successor, Bane, and her ancient vampire predecessor. The Complete Guide To Legacy of Kain elucidates that "Bane is a wizard of Nature. He manipulates the behavior of life and the elements. Through his magic he can change the nature of life itself, animating plants and influencing animals, creating new and weird life forms for his own purposes. The weather itself is at his behest".[4] Daniel Cabuco summarized the Nature Guardians' capacities as follows: "ability to commune and influence Nature, summon natural phenomenon for combat. Can warp creatures growth and abilities".[3] It seems likely that the scope of the martyred Guardian's abilities was similar.