Nupraptor the Mentalist was an antagonistic character in Blood Omen: Legacy of Kain. In the pre-Blood Omen era and Blood Omen era, he served as the Guardian of the Pillar of the Mind, and was the lover of Ariel, his Balance Guardian peer. Upon discovering the dead body of his beloved, Nupraptor descended into a vengeful madness, turning his powers against his Circle of Nine counterparts, and triggering the corruption of the Pillars.

In his quest to hunt down the Circle's now-tainted Guardians, Kain sought out Nupraptor first, seeking to destroy the source of the corruption. He confronted the Mentalist in his Retreat, and beheaded him in battle. In doing so, he was able to temporarily restore the Pillar of the Mind.

To Deny the Outside World

"Nupraptor, your madness has shattered our dreams and blinded you..."
―Ariel[src] 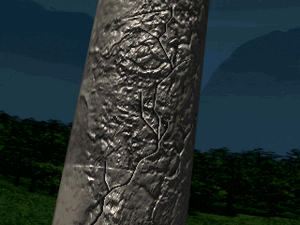 Nupraptor triggers the corruption of the Pillars.

Nupraptor was born to serve the Pillars of Nosgoth as Guardian of the Mind at some point in the centuries following Nosgoth's early history and, along with the immortality gifted to him by his role, Nupraptor's position also allowed him power over "mental and psychic abilities", making him "hypersensitive to people's emotions and thoughts"* and over-exposure to these had made him somewhat "unpredictable and illogical", though he was fiercely loyal to those he cared about. His well-known psychic powers made him a popular figure with pilgrims, who travelled from far and wide to seek his wisdom from his impressive retreat overlooking the town of Vasserbunde (which apparently catered for many of the pilgrims). The Pillar Token gifted to him was his enlarged cranium, represented as Nupraptor's Head.

At some point, Nupraptor became romantically involved with fellow guardian Ariel (Guardain of Balance) and the two embarked on a controversial relationship, of which other guardians may have disapproved*. The Cult of Hash'ak'gik seducing the Circle of Guardians behind the scenes, led to The Dark Entity being able to possess Death Guardian Mortanius and he was able to use the Necromancer's body to murder Ariel. Nupraptor was first to discover Ariel's corpse and suspecting the involvement of a 'traitor' Guardian, Nupraptor descended into a grief-fuelled madness, which led him to turning his phenomenal psychic powers against the the pillars and the Guardians themselves - setting off the Corruption of the Pillars.

For the next thirty years, Nupraptor would continue in anguish at his bereavement. He would withdraw completely to his retreat and sew his eyes and mouth shut "to deny the outside world"*, Pilgrims that still travelled to the retreat were seldom seen again and many were apparently tortured by the Mentalist.

"The Mentalist Nupraptor was renowned through Nosgoth for his tricks of the mind, telepathy and telekinesis. Pilgrims traveled from all across the land seeking the comfort of his lies. I sought not his wisdom but his life."
―Kain — Listen (file info)[src] 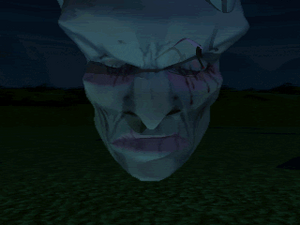 An hallucination of Nupraptor's self-mutilation.

When Kain returned from apparent death as a Vampire, Ariel directed him on a quest to 'restore balance' by killing each of the corrupted Guardians and returning their Pillar Tokens; thus restoring each the pillar in turn. Ariel made sure that Nupraptor (as the source of the the Corruption) was Kain's first target and Kain travelled North to Vasserbunde and Nupraptor's Retreat.

When Kain arrived in Nupraptor's Retreat, he found the stronghold largely abandoned and covered in Blood (suggesting the fates of many of the pilgrims that had visited). Ascending to the top of the retreat (the 'mind' of the skull-shaped stronghold), Kain confronted Nupraptor, but found Malek (Conflict Guardian and protector ofthe circle), waiting to defend the Mentalist. Nupraptor (possibly angry at Malek's lack of protection for Ariel) dismissed the Paladin and fought Kain alone, using his powers of telekinesis,teleportation and illusion to battle Kain whilst he remained seated. (see Nupraptor (boss)).

Once Kain was able to approach Nupraptor, he beheaded him, killing the mentalist and recovering his particularly gruesome pillar token; Nupraptor's head; and returning it to the Pillars of Nosgoth, he was able to temporarily restore the the Pillar of the Mind. Kain would continue with his quest, but only at its climax would he learn that he too (as successor to Balance Guardian Ariel ) had been tainted by Nupraptor's Corruption.

"You dare intrude upon my sanctuary? Can I not mourn in peace?
Leave... leave and let my solitude be complete..."
―Nupraptor — Listen (file info)[src]

Nupraptor does not directly appear in further titles; though his role as the source of the the Corruption of the Pillars of Nosgoth (whose effects Kain would still suffer until the climax of Defiance) looms large later in the series:

"So this was the Mentalist Nupraptor, this broken, pathetic little man. Yet crippled as he was, he would not yield without battle. Very well, old fool. If it is death you seek, I will not deny you."
―Kain — Listen (file info)[src]

Though theCorruption of the Pillars of Nosgoth has much to do with the mental state of the Pillar guardians themselves, the corruption was not caused (per se) by Nupraptor's descent into madness; instead the psychic attack on the circle was intentional; as the only method Nupraptor had to strike the circle's 'traitor' Mortanius.*

Nupraptor's age is not conclusively discussed in the series, but since we know that a Mind Guardian was killed by Vorador in Nosgoth's early history, Nupraptor cannot be older than 500 years at the time of the events of Blood Omen: Legacy of Kain (It is not clear if Nupraptor was born as a direct successor to this guardian, or years later after the death of another).

Nupraptor is described as a Mentalist; a stage performer who appears to demonstrate several apparently psychic abilities; in the real world mentalists were little more than stage conjurers.