Nupraptor's Retreat was the Stronghold of Nupraptor the Mentalist, it was visited by Kain in Blood Omen: Legacy of Kain and later by Raziel in Legacy of Kain: Soul Reaver.

Nupraptor's Retreat overlooked the town of Vasserbünde; The Retreat was a large skull-shaped building perched on the cliffs, a waterfall flowed from the skulls mouth and fed the waterways of Vasserbünde. Prior to Blood Omen, pilgrims apparently travelled from all over Nosgoth to visit Nupraptor here and the town below catered for them. By the time of Blood Omen and corruption of the Pillars, few pilgrims returned from the retreat and often screams and cackles were all that was heard in Vasserbünde.

At the start of his quest, Kain's first target was Nupraptor in his retreat and he travelled through Vasserbünde and up the cliffs to the keep. Once he entered he was ordered to leave by Nupraptor, who was still deep in mourning for Ariel, Kain however continued through the keep; finding his first Font of Putrescence and Energy Bank artefacts as well as gazing out through the eye sockets of the skull - one of which showed Nosgoth as it was, the other showed a twisted corrupted version. 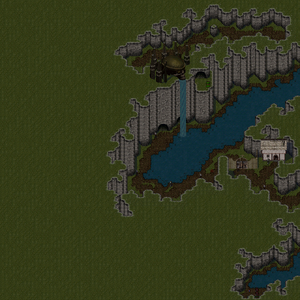 When he finally confronted Nupraptor, he was protected by Malek, but Nupraptor; angry at what he perceived as Malek's failure to defend the Circle at the death of Ariel; dismissed Malek, instead welcoming his fate. Nupraptor, crippled as he was, used several illusions and mental powers to trick Kain, but Kain was eventually able to get close enough to behead the Mentalist (Nupraptor's head being his pillar token). Upon leaving the retreat, Kain discovered the Spiked Mace.

In Soul Reaver, Raziel was able to get close to the retreat, which was now part of the Melchahim territory. The waterfall had dried up and the skull had fallen from the cliff, but Raziel was nevertheless able to ascened, through the remains of the retreat's interior to the lower jaw plate; where the skull had once been positioned; and on to find the Stone Glyph.

In Blood Omen, the retreat had many bodies inside, in various bloody states, evidently the remains of many pilgrims and Nupraptor's servants - one of the servants did survive, a girl who told Kain of the corruption Nupraptor had instigated and his self-mutilation and self-pity. Kain killed her out of mercy. 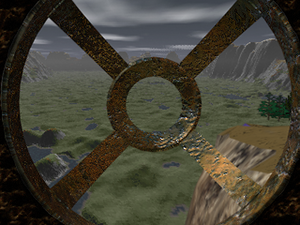 View from the 'Good' eye of Nupraptor's Retreat 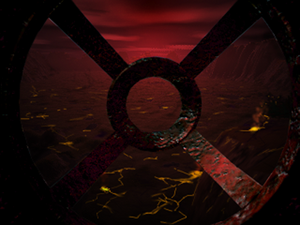 Through the eye socket which showed Nosgoth's corruption, Kain witnessed a scene similar in appearance to Dark Eden, considering that Dark Eden was expanding, it may be possible that this was a depiction of its expansion.

In Raziel's visit in Soul Reaver, he passes through one of the eye sockets to enter the cave to ascend the cliff. Upon reaching the jaw plate there is an impressive stained glass window; the window depicts angel and men and women apparently descending into water; the window has more in common with traditional real-world religious depictions and it's interpretation remains unclear, in contrast to many other murals in the series.