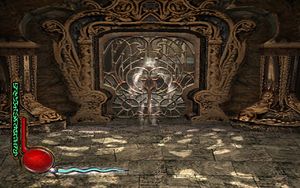 A permeable gate in Defiance

"Insubstantial barriers such as these are no impediment to you in the spectral realm. Will yourself to pass through, and you shall."
―Elder God[src]

Permeable Barriers - also known by specific terms such as Gates, Barriers, Bars, Fences, Cracks, Grates and a number of other related terms - were permeable environmental barriers that could passed through using the Mist Form and Phasing through gates abilities in the Material and Spectral Realms respectively. These barriers were encountered in Blood Omen: Legacy of Kain, Legacy of Kain: Soul Reaver, Soul Reaver 2 and Legacy of Kain: Defiance and could be navigated by both Raziel and Kain in different realms.

Permeable barriers have appeared throughout the series in a number of different forms, presenting a simple barrier to cross, albeit one that could be hidden or become a component in larger puzzles. Both Kain and Raziel were able to cross them, with Kain using Mist Form and Raziel able to use Phasing through gates whilst in the Spectral Realm.[BO1][SR1][SR2][DEF] 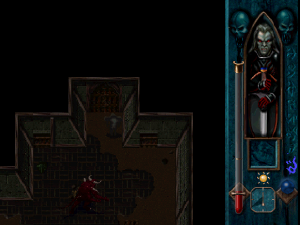 Kain uses mist to cross a gate in Blood Omen

Permeable Barriers were first seen in Blood Omen: Legacy of Kain and were generally encountered after Vorador's Mansion (chapter), where Kain discovered the Stone Keep on the banks of the Lake of the Dead and found the Mist Form ability within. To leave the keep it was necessary for Kain to use mist to pass through several barred doorways and gates; and thereafter he could occasionally encounter such barriers in the course of the rest of the game. Another type of permeable barrier could be encountered shortly after, as Kain was able to pass through the more subtly hidden 'cracks' in the Termogent Forest swamp and beyond. Kain could also return to the Cemetery and use mist form to cross the fences there and reach a number of secret crypts.[BO1][BO1-C6][1][2][3]

Permeable Barriers returned in Legacy of Kain: Soul Reaver where they had a much more uniform appearance as grates or gates. Here gates and fences could be seen from Raziel's emergence from the underworld and first use of Planar portals in Underworld (chapter), however they were unusable an acted as something of a barrier at the time. Other gates could be seen at the Sanctuary of the Clans, Raziel's clan territory and the Necropolis before Raziel faced Melchiah in his lair and consumed his soul, gaining the Phasing through gates ability. Thereafter Raziel could pass through gated barriers in the Spectral Realm and would use the ability regularly throughout the rest of the game. Notably the ability was used by Raziel to escape Melchiah's lair and breach the fenced off entrances to the Sanctuary of the Clans, Silenced Cathedral and Tomb of the Sarafan.[SR1][SR1-C2][SR1-C3][SR1-C4][SR1-C5][SR1-C6][SR1-C7][4][5][6] 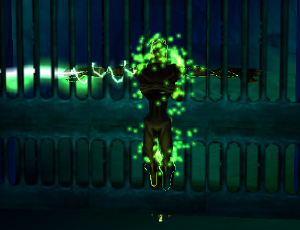 Raziel phases through a gate in Soul Reaver

Permeable barriers were again seen in Soul Reaver 2, where they retained much of their functionality from Soul Reaver - being breached by using the 'Phasing through' ability while Raziel was in the Spectral Realm. As the phasing ability was available from the beginning of the game, gated barriers did not act as a barrier mechanism in the way they had previously, instead being used more in puzzles - typically where Raziel was forced into Spectral to pass through a gate and then find a way to return to the Material Realm to interact with a particular object or mechanism. The first gated barriers were seen in A Reaver in Time in the Sanctuary area of the Sarafan Stronghold and they would be seen throughout the title, most notably in several of the forge areas.[SR2][SR2-C1][7][8]

Although both Kain's Mist form and many apparent gated barriers were seen in Blood Omen 2, they could not be crossed over in the same manner - effectively representing a boundary.[BO2] 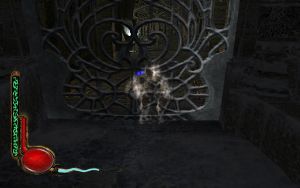 Kain using mist to cross a gate in Defiance

True permeable barriers returned in Legacy of Kain: Defiance, this time combining the approaches used by Raziel and Kain in previous titles. For Kain the barriers were little impediment to his progress as he was able to cross them by turning to mist and drifting through the bars. For Raziel they presented slightly more of a challenge as he was required to be in the Spectral Realm to be able to phase through the bars - as with previous games this effectively forced him into the Spectral Realm where he as unable to interact with objects, and this was often used as a mechanism in basic puzzles. The first gated barriers were encountered by Kain in the Sarafan Stronghold in Infiltrate the Stronghold, whereas Raziel encountered his first barriers as he reached the Cemetery at the end of Escape from the Elder God Chamber a short time later - thereafter both would frequently encounter barriers to cross.[DEF][DEF-C1][DEF-C2][9][10] 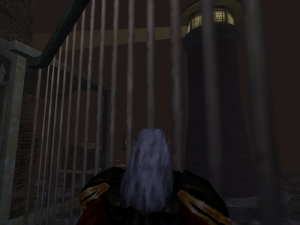