"Insubstantial barriers such as these are no impediment to you in the spectral realm. Will yourself to pass through, and you shall."
―Elder God[src]

Phasing was an earned ability first featured in Legacy of Kain: Soul Reaver and originally developed by the evolution of Melchiah as a Vampire in the Soul Reaver era. Retaining much of his link to Death and the Spectral Realm, Melchiah was able to exist in both Realms and whilst in the Spectral Realm he could use his phasing ability to pass through insubstantial gated barriers. When Raziel traveled to the Necropolis in Chapter 3 of Legacy of Kain: Soul Reaver, he was able to confront the devolved Melchiah in his lair and after defeating him, Raziel was able to consume his soul, gaining the ability for himself.[SR1][SR1-C3][1] After it was gained, Phasing could be used at any time to pass through gated barriers simply by moving toward them, though it could only be actively utilized in the spectral realm.[SR1][2][3][1] Raziel continued to use the ability throughout Soul Reaver initially using it to enter the Sanctuary of the Clans and begin his first encounter with Kain.[SR1][SR1-C4] 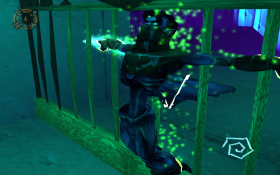 Phasing was retained as an innate ability in Soul Reaver 2 and could be used at any time by Raziel. Phasing again allowing Raziel to briefly "dissolve" his physical form to pass through gates, fences and other permeable barriers. The ability had much of the same functionality as before, requiring only that Raziel moved towards the barrier in the Spectral Realm to pass through it. Phasing would only work on completely permeable barriers and would be aborted if Raziel was struck whilst attempting to perform it.[SR2][4][5]

Phasing was again featured as one of Raziel's unique abilities in Legacy of Kain: Defiance, roughly presented as the equivalent of Kain's Mist Form. As before, Raziel had only to move towards a permeable barrier in the Spectral Realm and he would pass through the bars, albeit with a different, more forceful animation.[DEF][6][7] 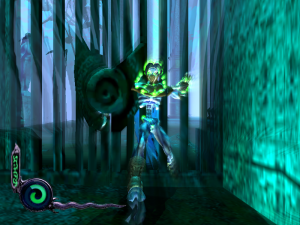 Raziel Phasing through a gate in Defiance