Pinnacle of the Silenced Cathedral 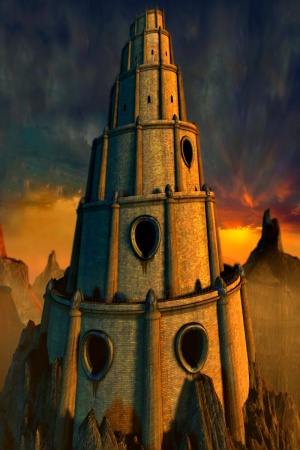 promotional render of the pinnacle of the Silenced Cathedral

The Pinnacle is seen briefly in the background of Raziel 's meeting with The Council in the Soul Reaver opening video and is featured in the final Chronoplast Vision and several concept arts.

Though the Pinnacle of the Silenced Cathedral is not visited in Soul Reaver, it was planned to feature heavily in the conclusion to the Original Soul Reaver Storyline . Raziel would have reached the Pinnacle by gliding from Kain's Mountain Retreat and would have continued to use the Amplified Reaver to battle off a 'swarm' of desperate vampires and open the sounding pipes, killing all of Nosgoth's Vampires as reconstructed in this video.

Raziel's "Hymn of Death" speech, removed from Soul Reaver was to have been performed at the Pinnacle of the Silenced Cathedral; high quality images of the Pinnacle suggest that the final section may have been an FMV and non-playable. The final Chronoplast Vision shows part of the aftermath of opening of the sounding pipes, with Raziel looking down at Nosgoth (Soul Reaver 2 would re-interpret the balcony as part of Janos Audron's Aerie .)