"These portals are your conduit between the spectral and material realms. With their aid, you may gather matter and will yourself to become manifest in the physical world.
This is taxing, however – your strength must first be fully restored.
You require no conduit to return to this plane – you may abandon your physical body at any time."
―Elder God — Listen (file info)[src]

Planar portals, also known as Material-Plane portals, Conduits into the Material Realm or simply Portals, were used throughout Legacy of Kain: Soul Reaver and Soul Reaver 2 by Raziel, they allowed him to "gather matter" unto himself and effectively cross from the Spectral Realm to the Material Realm, though Raziel was only able to utilize the portals if he is at full strength. Many puzzles in the Soul Reaver series relied on the Plane Shift mechanics of the planar portals. 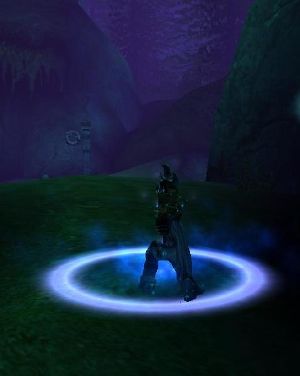 Planar portals were first seen in Legacy of Kain: Soul Reaver, shortly after Raziel emerged from the Underworld in the Underworld (chapter). Apparently gifted by the Elder God, Raziel was able to use these conduits to Shift from the Spectral Realm to the Material Realm, provided he had a full Health coil and used the Shift Glyph while stood on one. They were not necessary to return to the Spectral Realm and Raziel's Material Realm manifestation could be abandoned at any time.[SR1][SR1-C2][1][2][3]

This usage continued into Soul Reaver 2 with Raziel able to use the Shift Glyph when stood on a planar portal at full health to cross from the Spectral into the Material Realm. Again they were not needed to return to the Spectral plane, allowing Raziel to abandon his physical form at any time.[SR2][4][5]

In Legacy of Kain: Defiance a different Shifting mechanic is used. A Planar portal is initially found by Raziel in the Cemetery shortly after he escapes the Underworld in Escape from the Elder God Chamber. However, due to Raziel's disobedience of The Elder God, the Elder makes this portal vanish, implying the same has happened to the other portals throughout Nosgoth. This forced Raziel to find a different method to reach the Material Realm and after exploring the Cemetery in Find the Path to the Pillars Raziel discovered that he could Possess a Corpse host as a means to travel to the Material Realm by transferring his spirit into the body and manipulating its appearance to match his own.[DEF][DEF-C2][DEF-C4][6][7]

In the original designs of Legacy of Kain: Soul Reaver, Raziel was intended to discard the use of planar portals entirely. After the confrontation with Kain at the Chronoplast Raziel was originally to have absorbed a portion of Kain's soul, allowing him to Shift-at-Will - switching between the Spectral and Material Realms without any conduit. This would have been used to reach several previously unexplorable areas in addition to allowing Raziel to effectively teleport and ambush enemies. When the ability was removed from the title, portals were added to the areas that still remained in the game.[8][9] Using Debug menus it is possible to use the ability (labelled as "Shift Any Time") in Soul Reaver, Soul Reaver 2 and Defiance.[SR1][SR2][DEF]

The look of the planar portals has evolved and changed throughout the series from development. In early beta versions of Legacy of Kain: Soul Reaver the portals were represented simply as glowing lights on the ground with a sparkling blue plume, with the lights slowly changing between orange and white.[10] In the later beta this design was finalized as a set of pulsing blue expanding rings with a larger blue plume which swirled around Raziel as he stepped on them, and this design was carried into the retail version.[10][SR1] Soul Reaver 2 made additional changes to the design adding a subtle rotating blue patterned backdrop to the rings and widening the plume to a flame like design, with the changes caused by stepping on them dropped altogether.[SR2] For the brief appearance in Legacy of Kain: Defiance further changes to the design, removing the rings altogether and presenting a portal consisting solely of the rotating disk backdrop albeit darkened further to increase contrast - only when it was dispersed was a subtle plume effect visible. The successor of the planar portals - the Burial sites of Defiance - instead went with a different design consisting of pink rising gas with a skull motif, although early designs seen in Bonus materials presented a green spiral, similar to other spectral motifs.[DEF]