Provance was a southerly Nosgoth human settlement, introduced in Blood Omen 2. It was shown on maps in the post-Blood Omen era of the Fourth timeline and featured as a battleground for Kain's vampire army in the vampire-Sarafan war. It was subsequently featured as a playable location in Nosgoth, taking place in the mid-Soul Reaver era of the Second timeline, where it was a theater of conflict in the War for Nosgoth.

When Kain commanded the conquest of the land with his vampire army in the post-Blood Omen era, roughly two centuries after the collapse of the Pillars, he viewed a map in his headquarters with Vorador which depicted the southern regions of Nosgoth. The town of Provance was one of many landmarks included on the geography. Kain led the vampires south through Ziegsturhl before advancing to Provance – slaughtering humans in their wake – then west through Freeport, and finally southeast to Meridian, where they fought the Sarafan in the battle of Meridian, before the Sarafan Keep.[BO2-C1][1]

What became of Provance after the defeat of the vampire army was not divulged. However, the Hylden Lord and the Sarafan may have recaptured it: "the Sarafan seized control of all of Nosgoth" within the ensuing two hundred years.[BO2-C1]

Provance was known to have continued to exist into Soul Reaver era and made its playable debut in Nosgoth in this time as one of the first playable areas. Background lore indicated that in the early Soul Reaver era as the Major human kingdoms fell, it was considered a "strategic prize" situated in a "defendable enclave" between mountains and rivers at the border of vampire-controlled land around the Pillars of Nosgoth and Nachtholm and the human cities further south. As Kain's empire moved to capture the southern cities, the residents and defenders of Provance were left cut-off with no supplies and with little choice but to abandon the town to the vampires. Initially the town was used to "process supplies and prisoners." and satiate the "hedonistic" appetites of the vampires on the front lines, but as time progressed it became increasingly isolated from Kain's court at the Pillars and was slowly deserted by the vampires too.

As the humans began to return in the shadow of the Vampire civil war in the mid-Soul Reaver era, they soon occupied Provance again, once more recognizing its strategic importance in defense of the settlements further south. No major battles were seen at Provance, however both sides waged a brutal guerrilla war to control the town and the land around it.

As of the later Soul Reaver era observed in Legacy of Kain: Soul Reaver, Provance had presumably been leveled or destroyed. In the time of Kain's empire, the Human Citadel housed the "few humans that still [existed]".[2] 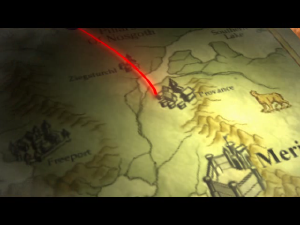 In the map, Provance lay on the southwestern edge of the Great Southern Lake. It sat south of the Pillars of Nosgoth, between Ziegsturhl and Meridian. It seemed that Provance was enclosed by a mountain chain to the east, the same chain bordering Meridian and the Sarafan Keep, and was shielded by several rivers that flowed from the Lake.[BO2-C1][1]

Provance dwarfed the nearby town of Ziegsturhl in terms of size, but, in turn, was dwarfed by the larger southern cities of Freeport and Meridian.[BO2-C1]

Provance and Freeport are both introduced in Blood Omen 2, but never actually seen, explored, or mentioned in that title beyond its image on the map in the game's introductory cinematic.[BO2-C1][1][3]

Provance, Freeport, Meridian, and most of the other locations in Nosgoth's southern regions were added to the lore of the Legacy of Kain series by the Blood Omen 2 development team, not the other Crystal Dynamics team led by Amy Hennig:[4][5][6]

"Mostly the locations themselves came from the needs of the design team. To create some fairly new locations that fit better with our needs in Blood Omen 2, we elected to move down the map of Nosgoth into some unexplored areas in the southern regions of Nosgoth."
―—Steve Ross[4]

In the real world, Provence is a region in southeast France. The possible misspelling of Provence/Provance is in line with the pseudo-German town names used in Blood Omen: Legacy of Kain.[BO1] All other writing reminiscent of the French language in Nosgoth primarily occurs within Meridian in Blood Omen 2.[BO2-C1][BO2-C3]