"Rahab. You have adapted well to your environment, for one so maladjusted..."
―Raziel — Listen (file info)[src]

Rahab is a recurring character in the Legacy of Kain series who appears in Legacy of Kain: Soul Reaver and Soul Reaver 2. Born in Nosgoth's early history, the human Rahab rose to become one of the prolific warrior inquisitors of the vampire-hunting Sarafan brotherhood. A millennium after his death, Rahab was resurrected as a vampire by Kain, and served as a member of the Council throughout the Soul Reaver era, raising the Rahabim clan. When Raziel embarked on his journey to destroy the Council, Rahab was the third of his former brothers that he killed. 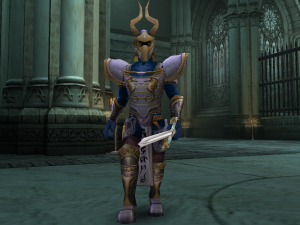 Rahab was born as a Human at some point in Nosgoth's early history. He would go on to join the Sarafan, eventually reaching the highly respected rank of Sarafan Warrior Inquisitor. Despite being one of the order's elite, Rahab was not involved in the assassination of Janos Audron, which was carried out by at Janos Audron's aerie by the Human Sarafan Inquisitors Raziel, Turel, Dumah, Zephon and Melchiah (the group having been led to Janos by a time travelling Wraith Raziel from the Soul Reaver era). Tearing out the Heart of Darkness from Janos' chest and taking the Reaver blade, the Sarafan retreated to their stronghold.

Janos' murder had dire consequences for Rahab, as the Wraith Raziel followed the Inquisitors back to the Sarafan Stronghold to avenge Janos' death and reclaim the Heart of Darkness, attacking the Stronghold at the same time as Vorador's legendary attack on the circle (at the same location and with the same motivation). In the chaos, WraithRaziel was able to recover The Reaver and shortly afterward Rahab confronted the Wraith Raziel, along with his brother Dumah, in the 'Sanctuary' area of the stronghold, telling Raziel that (to reach the Heart of Darkness) "You'll have to get through us first". As The Reaver had made him virtually invincible, Raziel was able to easily kill Rahab (along with Dumah), see also Rahab and Dumah. Rahab was entombed with the other 'martyr' Sarafan Inquisitors for a millennium in the Tomb of the Sarafan.

When Kain discovered a method of creating Vampires for himself, he raised the six Sarafan martyrs to serve as his Vampire sons; breathing part of his Soul into them to 'snare their souls' and reanimate their corpses (but keeping them ignorant of their previous Human lives); Rahab was likely the fourth of the six to be raised. Presumably following Kain's method, each of his new lieutenants raised their own vampires, giving birth to the vampire clans (with Rahab raising the Rahabim) and providing Kain with an army with which to conquer Nosgoth. In Kain's New Empire, Rahab was one of the members of the council which ruled Nosgoth, with Kain their only master.

Rahab served Kain and the council for roughly a thousand years and over the centuries Rahab gained many new gifts along with his 'evolution', developing basic 'gills' and gradually beginning to develop an immunity to the traditional Nosgothic Vampires weakness to water. Rahab was present at the council  meeting where Raziel revealed his wings and he also witnessed Raziel's execution at The Abyss. 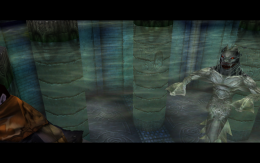 Over time, Nosgoth slowly became a wastleland, Kain's Empire declined and the clans scattered, with Rahab (and the Rahabim) becoming amphibious and overcoming their weakness to water; they learned to swim and retreated to their territory in the half-submerged Drowned Abbey. Rahab himself would eventually devolve into a shark-like sea creature. But the clan's immunity to water would come at a cost of an extreme sensitivity to sunlight.

When Raziel returned five centuries later, he passed through the Tomb of the Sarafan and using the Telekinetic Force Projectile he was able to enter the Drowned Abbey. Carefully negotiating the waterways (which would still have dissolved Raziel's own Material manifestation), Raziel made his way through the Drowned Abbey and assailed by the 'cobra-like' Rahabim, Raziel was eventually able to locate Rahab's chambers. Raziel confronted his 'younger brother' with the revelation that they had once been Sarafan, but Rahab was unconcerned, believing Kain had "saved [them]... from [them]selves". Rahab confirmed his loyalty to Kain and that he still spoke with their master; indeed Kain had already warned Rahab of Raziel's return.

Raziel fought Rahab, attempting to remain on one of several platforms as Rahab shot projectiles at Raziel to knock him into the water. Eventually Raziel was able to exploit Rahab's weakness to sunlight, using the Telekinetic Force Projectile to destroy all of the stained glass windows in Rahab's chamber and allowing the sunlight to stream into Rahab's Chamber, killing him (see also Rahab (boss)). With Rahab's death, Raziel was able to consume his Soul; gaining the swimming ability and preventing Raziel's Material manifestation from being dissolved by water.

In the early beta version of Legacy of Kain: Soul Reaver, Rahab's character model was noticeably different to its final incarnation - his head is more fishlike, and his body adopts a more greenish hue.[1] This version of Rahab is also seen in the initial "Whos's Who" section of the Prima guide, but changes to his retail depiction by the "Drowned abbey" section of the main walkthrough.[2]

The Human Sarafan Inquisitor Rahab featured in Soul Reaver 2, like some of his other brothers, shared some similarities to the Vampire he would become; Rahab's armor was decorated with seahorses and he had a blue colour scheme.

In 2013 series artist Daniel Cabuco created new artwork of Rahab showing him first evolving his trademark gills along with further extrapolation of Rahab's vampire development and his overcoming of the traditional vampire weakness to water:

"I imagine it would have started with him being burned by water, and drinking blood to heal. Being in a land with a lot of water, I'm sure he'd be somewhat bitter over the "land" he was given. Perhaps the humans who lived in the area found security by creating great waterfalls and moats, making him even more angry at their impudence. (They feel safe in MY LANDS, those cattle!)
So I imagine he'd start draining blood while exposing himself to water more and more. Casting Kain's water breathing and protection spells so often that they'd weave themselves into his being. Taking one of Kain's gifts and turning it into his entire being.. Kain could only resist water temporarily.. but what if Rahab could actually ADAPT to it! He'd be so powerful and valuable.. he and his kind could go places others never could.. not even Raziel! That kind of motivation and jealousy strikes true with me.
So he'd burn and heal, drink blood and immerse.. perhaps doing so at the same time (Telekinetically drinking) until the image I painted happened: The gills.. the GILLS! They symbolize his newfound power, one that he would present to Kain in court, to drive the others into jealousy and supplication to him. He'd move up the chain of value.. become Kain's favored for that decade.. maybe that century!
The pain didn't matter.. only success."
―—Daniel Cabuco[3]

in Legacy of Kain: Soul Reaver, vampire Rahab was of lightly fit build and as tall as raziel, his hair was in a short ponytail. He had scaly bluish skin with gills on his neck (likely due to a result of his adaption to water). He had bright blue eyes with the standard empire equipment with a dark blue cape with the Rahabim symbol.

in his devolved form, he was a fast and agile sea creature resembling a humanoid fish man with bright red eyes, sharp fangs, and a long sharp fin running down his spine to the end of his tail. His skin is scaly and sickley gray with green and blue hues.

In Soul Reaver 2, Rahab is portrayed on a mural in the chapter house of the Sarafan stronghold. He is portrayed as having black hair in a ponytail with a blue garb, along with seahorses on his chestplate, and ironically wields a Sarafan trident. His helmet has large horns curving upwards. He wears grey, guilded armor with medium-sized triangular pauldrons decorated with runes and the symbol that would later become his clan symbol.

Rahab in his vampire unlife was quite composed and calm headed individual. In his devolved state he was much more like his Sarafan counterpart being dutiful and confident yet with a sense of brotherly pride in his voice. He was not surprised by the fact that he was a Sarafan in his former life and viewed his resurrection as a vampire as an act of redemption.

During the development of Legacy of Kain: Soul Reaver, Rahab had the codename "Aluka" or "Aluka Boss", Aluka being Hebrew for "leech"; a term that has been used to describe mythical vampires in general. In biblical mythology, "Rahab" was "prince of the primordial sea".

Rahab was also the name of a prostitute in the Bible, but that does not entail that Eidos used this as a building block for Rahab's character.