Raising of the lieutenants 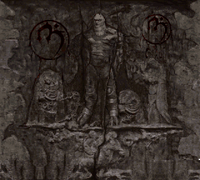 The vampire lieutenant Melchiah as depicted in Legacy of Kain: Soul Reaver.

The raising of the lieutenants was an event first mentioned in Legacy of Kain: Soul Reaver. It marked the close of Nosgoth's post-Blood Omen era, and the advent of the Soul Reaver era. Five centuries after the collapse of the Pillars, the last vampire and Guardian of the Pillar of Balance – Kain – decided to recruit a cadre with which to conquer the human-dominated land.

Plundering the Tomb of the Sarafan, Kain found the corpses of the Sarafan warrior inquisitors, and resurrected them as his vampire sons. The six fledgling lieutenants, oblivious of their human pasts, assisted him in destroying the major human kingdoms, raising clans of their own. The end result was Kain's empire, which continued to dominate Nosgoth for many centuries.

"Before the dawn of the Empire, you were chosen.
Kain – Nosgoth's solitary, self-declared monarch – plundered this tomb and raised you from these crypts. Breathing his vampiric gift into your defiled corpses, he resurrected you as his favored sons."
―The Elder God — Listen (file info)[src]

The Twilight of Purgatory

"I found the Tomb of Sarafan, Kain.
How could you profane a priest by turning him into a vampire?"
―Raziel[src]

Five centuries after his original quest in the Blood Omen era, Kain – "appreciating the irony of his decision" to damn the world – "set his capital in the ruins of the Pillars of Nosgoth and began his conquest of the world", with the Pillar of Balance serving as the base of his throne.[1][SR2-C9][2][3][4] The land was still dominated by mortals, and Kain remained the last surviving vampire.[1][3][4][BO1-C11][SR2-C2][DEF-Comic] Thus, allies would be necessary to overthrow the "corrupt human world" and restore the "natural order".[DEF-Comic][5]

Kain previously considered himself incapable of creating new vampires.[BO2-C3] However, he discovered an unconventional means of siring offspring as his powers steadily accumulated.[2][3][4][6][7] With this ability in tow, he decided to indulge in a well-calculated "blasphemous, private joke".[SR2-C9][2][4]

Galvanized by his "contempt for mankind", "Kain raided the ancient tomb of the Sarafan, a fanatical order of warrior-priests once sworn to eradicate the vampires plaguing Nosgoth".[4][SR1-Comic] Within, he found the corpses of six warrior inquisitors who led the brotherhood in Nosgoth's early history, all "well-entombed" and hence "spared the corruption of the grave".[2][SR2-C1][SR1-C6] By breathing a small portion of his soul into a corpse, he could draw that creature's original soul back into its body, revivifying it as a fledgling vampire.[2][3][6]

"Dipping into the underworld, Kain snared six souls and thus birthed his lieutenants" – he resurrected the six inquisitors, Raziel, Turel, Dumah, Rahab, Zephon, and Melchiah, in respective succession, "going from crypt to crypt".[SR2-C9][SR1-C6][SR1-C1][8][9][SR1-C3] The martyrs arose, transformed but alive once more, as "his favored sons".[SR1-C6]

"How could I not?
One must keep his friends close, Raziel – and his enemies even closer."
―Kain[src]

Raziel unearths his past life in the Sarafan Tomb.

Those revived earlier proved to be stronger: Raziel enjoyed favor as the "first-born", whereas Melchiah "was made last, and therefore received the poorest portion of Kain's gift".[SR1-C1][SR1-C3] All six had been "too long dead to remember much of their human lives; they [were] ignorant of their Sarafan roots", and of Kain's premediated irony.[2] The Tomb itself, and the evidence within, became "impenetrably sealed".[SR1-C6]

As Kain's young empire grew, each of the former inquisitors – now the vampire lieutenants of what would become known as the Council – proceeded to recruit legions of their own and "pillage" the land.[3] By ""turning" the corpses of their human victims to do their bidding", they raised the Razielim, Turelim, Dumahim, Rahabim, Zephonim, and Melchahim clans, all answerable to Kain.[2][10][SR1]

United, the new vampire race engaged in war to subjugate Nosgoth's major human kingdoms and vampire hunters. It proved "inevitable" that the kingdoms fell, and, "within a hundred years, humanity had been thoroughly domesticated".[3][SR1-Comic] The vampire hunters subsisted: "there remained some feral humans scattered across the hinterlands, clinging to their hopeless holy war to rid Nosgoth of 'the vampire scourge'. They were tolerated. They made existence for the fledglings more challenging".[3][10][SR1] Kain's lieutenants continued to build the empire over the ensuing centuries, thoroughly unaware they had become "the very thing they so despised" as humans.

Following his execution and resurrection, Raziel eventually discovered the "dirty secret". Bent on revenge against Kain and the vampires, he slaughtered Melchiah and Zephon, then proceeded to the Tomb of the Sarafan, whose "mysteries lay exposed".

"The Sarafan were saviors, defending Nosgoth from the corruption that we represent.
My eyes are opened, Kain – I find no nobility in the unlife you rudely forced on my unwilling corpse!"
―Raziel[src]

Slaying each of the Sarafan commanders, Raziel fulfills his cyclic destiny.

Later in his quest, Raziel traveled back in time to Nosgoth's early history, seeking the ancient vampire, Janos Audron. After Janos was killed by the Sarafan warrior inquisitors, Raziel – in a vengeful effort to recover Janos's Heart – pursued them to the Sarafan Stronghold, and killed all six with the Reaver during the simultaneous slaughter of the Circle, including his former self. He realized "how he himself slaughtered the Sarafan lieutenants, and was his own murderer, and how he thus became the catalyst not only of Kain's future empire, but of his own dark destiny". 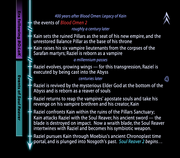 The raising in the Soul Reaver 2 official timeline. 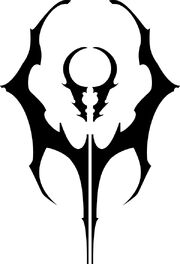 Kain's symbol, representative of the empire. 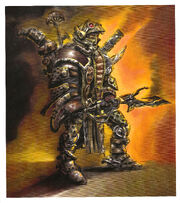 The raising of the lieutenants was first explored in the second timeline, and it endured into the third and fourth timelines. It is uncertain whether or not it occurred in the first timeline. Its events were not significantly altered, if even altered at all, by the second or third paradoxes.

"As I understood it in our world, a portion of the soul had to be transported into the vessel to call back the original soul and curse it, fusing it with undead life. Traditional vampire creation theories usually have living willing victims. The Sarafan that Kain raised were clearly dead a very long time, and therefore would need blood and soul transferrance [sic]. This is a form of necromancy (not the kind Mortanius used) using vampiric resurrection and blood gift. And the younger vamps can't do it.
"Also,I didn't mean to imply that Vorador used necromancy, but that he had to be an Elder in order to raise vampires.
"If I was going to do a level in LOK where you raise the Sarafan Lieutenants, I'd make sure there were quests to bring back things to the corpse, and maybe an amphora jar with blood in it for Kain to recover after raising a corpse."
―—Daniel Cabuco[11]
"As for how much of a fight the humans put up.. it was spectacular! I said before I always wanted to make an LOK MMORPG, with the Humans, Vampires and Hylden (or another race) in contention. Taking Humanity by surprise and taking out important strategic elements is how they would have domesticated humans in a mere 100 years. (That's really not that long to completely wipe out a nation of Humans)
Once Kain organized the Lieutenants, the early part would have been more about subterfuge, and corrupting/destroying large cities. (If you have seen Avatar: the Last Airbender.. it's sort of like how they took Ba Sing Se)
Later, once Kain's army rose as a credible military threat, the Humans would have started organizing or trying to organize into military Citadels. Epic battles would have ensued with the dead simply adding to Kain's army (using the flayed souls of his Lieutenants)
Assassination, Spec Ops, wet works, strategic military operations, and in some cases brute force would have been key to decimating human resistance. It would have been a great era to visit in another Kain game at the very least."
―—Daniel Cabuco[11]