"Though much of Nosgoth’s landscape had changed, these cliffs gave me my bearings. My clan territory was to the west - I was anxious to see how my descendants had fared during the centuries of my absence."
―Raziel — Listen (file info)[src] 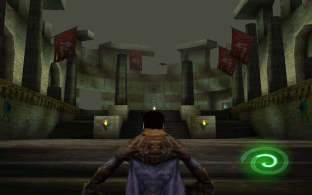 Raziel's clan territory was the home of Raziel and the Razielim in Kain's empire in Legacy of Kain: Soul Reaver.

When Raziel returned from the Abyss after his execution, emerging in Kain's empire, his first thoughts were regarding the safety of his clan, thus he travelled to his clan territory. He ultimately discovered the Stronghold empty and long abandoned.

Raziel took this as evidence of a genocide against his clan by Kain further motivating his hatred against his former master.

Raziel's clan territory is never named in Soul Reaver and there are currently no clues as to its name.

The Razielim may have indeed been wiped out by Kain, but Raziel's clan territory provides little evidence of this. The only evidence are blood stained shields mounted on walls, but apart from this, it is totally empty and there are no signs of a struggle or bodies (unlike what is shown in Dumah's territory, The Ash Village ), though this may be because the genocide of Raziel's clan happened centuries before that of Dumah's clan.