"What I have made, I can also destroy, child."
―Kain[src]

The Razielim, also known as Raziel's clan, comprised one of the six vampire clans which inhabited Kain's empire, and its members were the vampire children and descendants of Raziel. Initially mentioned in Legacy of Kain: Soul Reaver, they were ostensibly eradicated following Raziel's execution, believed by Raziel to be at Kain's hands.

Nosgoth ultimately revealed that clan had survived for a time after Raziel's disappearance but had been greatly persecuted and devolved due to hiding underground near Coorhagen, while a civil war between the vampire clans erupted due to Kain's absence. By the time of the War for Nosgoth against the humans, the surviving Razielim Sentinels fought for the Vampires against the human threat.

"Utter desolation. My once-proud kin, wiped from this world like excrement from a boot.
I knew the hand that wrought this deed..."
―Raziel[src]

Unaware of his own heritage as one of the leading warrior inquisitors of the Sarafan, Raziel personally raised his clan during the Soul Reaver era, over the century following the raising of the lieutenants at the Tomb of the Sarafan.[SR1-C6][1][2][3] Alongside the Dumahim, Melchahim, Rahabim, Turelim and Zephonim, it was one of the "six legions of vampires" involved in "the destruction of the major human Kingdoms"; pillaging Nosgoth, they had thoroughly domesticated humans within a hundred years, despite the efforts of the vampire hunters.[3][1][2]

Raziel's clan dominated a stronghold in territory west of the Lake of the Dead.[SR1-C2] Over the millennium of Raziel's service, the "lesser vampires" provided "amusement and spice to an increasingly uninspired court"; presumably, his own clan was involved in these power struggles. The Council would help and foil plots between the clans, betting upon the outcome as the factions warred.[3][1][2] A thousand years after his resurrection, Raziel convened at the Sanctuary of the Clans with his lieutenant brethren and Kain, where he revealed that he had pupated beyond Kain, transgressing against his master.[SR1] Purportedly acting on "a jealous whim", Kain ripped the bones from Raziel's new wings, and ordered Turel and Dumah to cast him into the Abyss.[SR2-C2][SR1-C8][SR2-C9]

Nearly a millennium later, Raziel returned to Nosgoth as a wraith, apparently resurrected by the Elder God.[3][1][2] Upon reaching the Lake of the Dead, his first undertaking was a return to his clan territory; he "was anxious to see how [his] descendants had fared during the centuries of [his] absence".[SR1-C2] To his horror, he discovered the city was desolate, "clearly abandoned for centuries". Only roving fledgling Dumahim inhabited the place, but beyond the decorum and tattered flags which still bore his clan symbol, there was no evidence of his children's presence - he was certain that his "once-proud kin" had been "wiped from this world like excrement from a boot".[SR1-C2]

Raziel did not encounter any members of his clan during his exploration of Nosgoth, and when pressed as to their fate, Melchiah suggested that Raziel was "the last... to die". He hinted that the clan had proven "an upstart inheritance", one which Kain "would [not] risk his empire upon".[SR1-C3] When Raziel directly confronted Kain on the gravity of this supposed "act of genocide", Kain was indifferent; he simply responded that "what I have made, I can also destroy, child".[SR1-C4]

Eventually it was revealed that after Raziel's execution and Kain's abandonment of his empire, The Razielim vampires were one of the clans that took part in the civil war as the empire fragmented and they were heavily persecuted by the other clans, believing they were following Kain's wishes. Later the surviving Sentinels|Sentinel class Razielim would be forced to participate in the subsequent War for Nosgoth against the resurgent human threat in the mid Soul Reaver era.

"What has become of my clan? Answer me, little brother, or I will beat an answer from your horrid lips."
―Raziel[src]

Like their fellow vampires, Raziel's clan carried the blood curse, blood-thirst, immortality and sterility inflicted on their ancient vampire ancestors by the Hylden, during the vampire-Hylden war, and most likely developed the yellow or amber irises and tridactyl claws and feet characteristic of their race.[DEF-C4][DEF-C6][4] They were created from reanimated human corpses, restored to unlife with the infusion of souls, and "gain[ed] their advantage from the powers of the underworld".[3][1][2][5]

As a result of Nupraptor's corruption - which was passed on to all of Kain's descendants - Raziel's clan devolved and pupated as the centuries passed,[6] "becoming less human and more... divine".[SR1-C1] Raziel inherited the strongest portion of Kain's soul, and his descendants were likely the most powerful vampires in Nosgoth, apart from the members of the Council.[SR1-C1][7] They survived beyond Raziel's execution, adults of the clan have emulated the physical developments that their patriarch had begun to exhibit, growing chiropteran wings which enabled flight.[8][9] Based on the helmet worn by the Sentinel class having no eyeholes, they appear to depend on echolocation to know their surroundings, much like bats, which hints at them either poor eyesight or light sensitivity (although not an increased weakness to sunlight, like the Rahabim)

Artist Daniel Cabuco noted that in Kain's empire prior to Raziel's execution and their devolution, the Razielim had taken roles described as: "Artisans, Philosophers, Spellbinders, Tacticians..., Blood Bankers, and manipulators." and it was further elaborated that the "Razielim would use their spellcraft to spy on other clans, and manipulate them with a wry hand".[10][11]

Clan leader and patriarch Raziel is only seen in his Vampire form in the opening videos of Legacy of Kain: Soul Reaver which depict Raziel's execution and subsequent resurrection as a wraith centuries later.[SR1-C1] When Raziel returned after a millennium in the Abyss he visited the vacant Razielim clan territory, finding it derelict and abandoned he assumed Kain was responsible for the destruction of his clan.[SR2-C2]

Besides Raziel no members of the clan were seen in Legacy of Kain: Soul Reaver and they were not seen or mentioned in the rest of series until their appearance in Nosgoth, set much earlier in the Time-stream, where a partially devolved Razielim variant known as the Sentinels were seen as a playable class.

The Sentinels were the only class of Razielim observed in the series. Encountered in the mid-Soul Reaver era War for Nosgoth, they had evolved quicker than the other clans, gaining the flight capabilities of their patriarch, but had also devolved while hiding underground near Coorhagen.

Unfortunately their bloodline’s pupating methods have not been witnessed, nor is there any hint from official sources, or any information in cut material.

"I am your creation, Kain - now, as before. You criticize your own work.
What have you done with my clan, degenerate? You have no right--"
―Raziel[src] 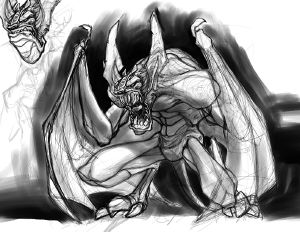 Legacy of Kain: Soul Reaver originated as Shifter, an independent project by Amy Hennig, Seth Carus and Arnold Ayala of Crystal Dynamics which never entered production in its original form.[12] As was the case with the game's other vampiric elements, Raziel's clan was presumably conceived after Shifter was merged into Nosgoth and the Legacy of Kain IP, which incorporated "a lot of research into vampire mythology".[13]

In Legacy of Kain: Soul Reaver, Raziel is led to conclude that his clan has been destroyed by Kain, an assumption which Kain does not explicitly confirm or deny.[SR1-C4] With subsequent games, Kain's villainous Legacy of Kain: Soul Reaver portrayal has been unveiled as a ruse, part of a complex plan to eventually restore the Pillars of Nosgoth and return them to vampire guardianship; his "one last hand to play against Fate".[SR2-C5][DEF-C13] All along, Kain had been counting on Raziel's "reckless indignation", hoping to deliberately goad Raziel into pursuing him into Nosgoth's past.[SR2-C2] Thus, the question as to whether Kain truly eradicated Raziel's descendants had remained open to debate.[9] When queried on the subject in 2002, then-series director Amy Hennig cryptically replied that "this is currently unrevealed".[5]

Former lead artist Daniel Cabuco, would subsequently offer more on the role of the Razielim:

"When I worked on Soul Reaver, I believed them all killed (with perhaps a survivor or two). If you look at the scheme, Raziel's clan was the most powerful and favored. The sudden loss of their leader, and favor with Kain meant that they were targets for destruction: The other clans would have gleefully torn them apart. Based on the original SR storyline, Kain couldn't risk any of them developing wings and showing that Kain's gifts were mutating and growing beyond the Master. Kain was always first with the gifts.. that's how he maintained power.
By the time Defiance was made, I was wistfully thinking that perhaps a few of them survived, hiding throughout the realm. It's a sad thing though, because they would still be tainted and doomed to devolution. By the time Raziel saw them again, he probably wouldn't recognize them. Even if they did survive, I imagine Kain would have to put them down, perhaps activating the silenced cathedral so he could start over.. IF he went back to the original SR1 timeline."
―Daniel Cabuco[7] 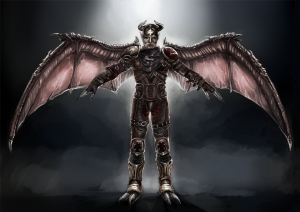 Their appearance in Nosgoth greatly expanded upon the backstory of the Soul Reaver era, revealing that Kain had abandoned his empire in the wake of Raziel's execution, leaving the clans and lieutenants to fend for themselves. As the clans fragmented and clashed in a bloody civil war for control of the empire, the Razielim were particularly persecuted and victimized by the others with the clan elders wiped out by the others. Meanwhile, the few hundred Razielim secreted away in isolation began to awake, but – deprived of blood, and unable to escape – they physically degenerated over the decades, manifesting chitinous exoskeletons and leathery wing membranes. As the resurgent humans began attacking the Vampires and recapturing territory a new War for Nosgoth began and the few Razielim survivors were forced to band together with their brethren to combat the renewed human threat.

For their redesign and adult appearance in Nosgoth, Daniel Cabuco noted:

"Fallen from grace, enslaved and brought low from their once exalted status, the Sentinels of Clan Razielim hide their disfigurements behind masks. Forced to cobble together armor and clothing, they silently mourn their lost beauty, wealth, and power."
―Daniel Cabuco

"For the fallen Razelim Sentinels, we brought in aspects of Raziel as part of their identity. The cowl on the neck and the fang bearing masks are an unconscious tie to their fallen master's form at the bottom of the Abyss. And like Raziel, they have a design reminiscent of tears on the masks to represent the mourning of all they have lost. Their materials are more cobbled together, less refined than the other clans, due to their lack of wealth and craftsmen. Horns were added to their masks to give them a more distinct silhouette and reinforce their desire to once again instil fear in their enemies, if not other Clans."
―Daniel Cabuco