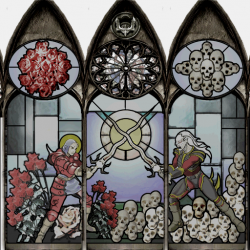 A mural illustrating one version of the Reaver convergence

"The Reaver is the key.
Two incarnations of the blade meet in time and space – a paradox is created, a temporal distortion powerful enough to derail history."
―Kain[src]

The Reaver-convergence is a temporal event caused by two versions of the Soul Reaver blade meeting in space and time. Such a meeting presents a temporal paradox which make the Time-stream vulnerable to change. At least five convergences have been seen in the Legacy of Kain series, with three resulting in history-altering paradox events. The first Reaver convergence was seen in Blood Omen: Legacy of Kain and they were central to the plot of Soul Reaver 2.

Nosgoth's time continuum was extremely rigid and resilient, and did not normally allow for the introduction of paradoxes: the map of each individual's destiny was fully outlined and immutable, accommodating for time travel events and preventing contradictions.[SR2-C5] Even to characters who knew the future and were aware that "free will is an illusion", resisting history was usually an impossibility: they did not possess the intrinsic free will necessary to defy "the rules of fate and predetermined events".[SR2-C1][1] This theory of predestination was a fundamental, indiscriminate constant, and applied to almost all entities within the Material, Spectral and Demon Realms alike.[1]

There were however loopholes to this process - and these were related to the wraith Raziel, who could make choices freely, unhindered by the predestination others were subject to.[SR2-C5][DEF-C11][DEF-C12][2] Only vague descriptions as to why he was singular in this regard were afforded: his free will was usually attributed to "his remaking into the world" at the hands of the Elder God, and his resultant liberation from the Wheel of Fate.[3][1][DEF-C11] It may also have been connected to his destiny to become the captive, soul-devouring entity within the Soul Reaver, and to later wield a future incarnation of his own soul - the Wraith Blade; the meeting and constant presence of two incarnations of the same soul-devouring entity, crucial to the timeline, in close proximity - and the very possibility that one might attempt to devour the other - may have contributed to his unique exemption.[SR2-C10]

On the rare occasions where two incarnations of Raziel's soul met, in either the forms of the Soul Reaver or the Wraith Blade, a Reaver-convergence was the result: "reality itself" would tangibly warp and bend slightly, creating a sense of vertigo, or displacement.[SR2-C5][SR2-C10][4][SR2-C1] At such points, there was a window of opportunity in which it was possible to create a paradox, potentially sufficient enough to derail history and rewrite the timeline.[SR2-C5][SR2-C10][BO1-C11] Kain analogized these junctures to the flipping of a two-sided coin: "suppose you throw a coin enough times... suppose one day, it lands on its edge".[SR2-C1]

Only relatively slight diversions could be triggered; most major events remained constant in Nosgoth between each timeline. If a paradox blocked the time continuum, history would always follow "the path of least resistance while admitting only the slightest alterations". Defying the force of history was always a dangerous gamble - "if events [could not] be reshuffled to accommodate the change", the irritants responsible for the contradiction would simply be expelled from the time-stream.[SR2-C5] Such a fatal paradox did not overtly happen in the Legacy of Kain series, but the concept served as a looming danger which Kain and Raziel were forced to acknowledge and remain wary of.[SR2-C5][SR2-C10]

A number of Reaver convergences were seen in the series, with the first occurring in Blood Omen: Legacy of Kain chapter Stranded in Time, when Kain was manipulated into going back in time and eliminating William the Just, though it was not explicitly labelled as such at the time. Time Travel and the inherent paradoxes involved would become a central theme of Soul Reaver 2 which would go on to feature Reaver convergences in A Reaver in Time, A Fateful Meeting and Epilogue as Nosgoth's historical continuum was explored - and the convergence ultimately explained by Kain with reference to the first convergence. Kain subsequently persuaded Raziel to use such a convergence to spare his life and later used another convergence to temporarily spare Raziel - changing history significantly in the process. Two further possible Reaver convergences were seen in Legacy of Kain: Defiance both in the same brief manner as the finale of Soul Reaver 2, however history was not obviously changed in these circumstances.[BO1-C10][BO1-C11][SR2-C1][SR2-C5][SR2-C10][DEF-C12][DEF-C13]

The following are explicitly confirmed in dialogue to be times when a Reaver-convergence was triggered.

The following occasions are not treated as Reaver-convergences but each did feature possibility of a brief convergence; as with the Third paradox. However these events did not include any of the temporal distortion observed and no changes in the timeline - potential or realised - were associated.

While both William and Kain had versions of the Soul Reaver in their battle in Stranded in Time in Blood Omen: Legacy of Kain, the full circumstances were not explained by Silicon Knights - although in the official FAQ they did acknowledge the presence of two versions of the blade and the necessity of using the Soul Reaver against William to defeat him.[BO1-C10][4]

The paradox created by the meeting of two versions of the Soul Reaver was ultimately developed by Amy Hennig in the course of the development of Soul Reaver 2 both to satisfy the previous alteration of history in Stranded in Time against their concept of history and time travel, but also to account for the further changes to the background that would be introduced in the upcoming Blood Omen 2 by finding a loophole already existing within Blood Omen to justify the historical changes. As Daniel Cabuco explained:

Retroactively these developments made the meeting between William and Kain in Stranded in Time a juncture point where history was changed and a new timeline was created; while the convergence seen in A Reaver in Time became a point where history was not altered (by the possible death of Moebius at Raziel's hand). The term "Reaver convergence" ultimately comes from the Dark Chronicle chapter title and stage directions of the latter.[BO1-C10][SR2-C1]