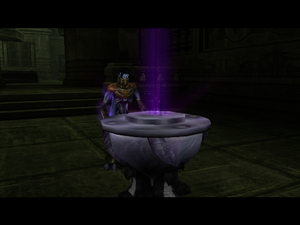 "Now I understood the purpose of the mysterious basins I had seen throughout my journey.
They were elemental fonts, each attuned to a fundamental essence.
When I forged the blade, every font in Nosgoth with the same elemental attunement was simultaneously quickened.
The Reaver's enhancements were never permanent, but these fonts enabled me to re-imbue the blade by bathing it in the elemental energy distilled therein."
―Raziel — Listen (file info)[src]

Reaver fonts, also known as Elemental fonts or simply Fonts, were small constructions found throughout Nosgoth in Soul Reaver 2 which provided Raziel with a method of imbuing the Wraith Blade with different elemental energies, effectively allowing him to switch between different temporary elemental Reaver enhancements.

The elemental Reaver fonts were found throughout Soul Reaver 2. The first fonts could be found by Raziel in the corridors next to the Circle's gathering-room within the Sarafan Stronghold in A Reaver in Time and were initially discovered in their inactive state. As Raziel explored the Nosgoth of the Pre-Blood Omen era he could find many more of them scattered throughout the land, although he did not comment on them until he breached the Dark forge in Through the Swamp.[SR2][SR2-C1][SR2-C2][SR2-C3]

After completing the puzzle of the forge and imbuing the Dark Reaver, Raziel saw that the fonts in the forge had become active allowing him to re-imbue the Wraith Blade with elemental Darkness whenever it was necessary. Thereafter Raziel could discover many more fonts attuned to the elements of Darkness, Light, Air and Fire, each activated once Raziel had completed the appropriate forge and gained the associated elemental enhancement.[SR2][SR2-C3][SR2-C4][SR2-C6][SR2-C8]

Once activated each font could be used at any time to re-imbue the specific element it was attuned to, enabling Raziel to imbue elements he had lost through Shifting realms of through imbuing others. The positioning and switching of elements and enhancements was integral to many of the puzzles in later stages of Soul Reaver 2. The elemental fonts could only be accessed in the Material Realm.[SR2][1][2]

Reaver fonts were not included in further titles, instead Raziel gained more permanent enhancements that could be selected at will.[DEF]

There were four types of elemental fonts - Dark, Light, Air and Fire, which corresponded to the four Reaver enhancements the Dark Reaver, Light Reaver, Air Reaver and Fire Reaver. Each font had subtly different designs depending upon the elemental attunement, with top side and plume appearance varying.[SR2]

Generally the Reaver fonts consisted of a wide circular 'bowl' with twisting supports around the outside leading up from four black feet arranged in a cross shape, each with a grey patterned panel facing outward. Atop the bowl a circular lid was fixed with a circular hole in the center from which the elemental plume would issue when the font was activated. Several minor differences were seen in the design which changed according to the element of the font:[SR2]

In Legacy of Kain: Defiance, Raziel no longer makes use of the Reaver fonts and it is implied that with the more permanent versions of the Wraith blade he no longer has need of them. This does not explain their absence which was originally intended to have a greater role in the plot, with them being pulled down by the Elder God, forcing Raziel to seek out the more permanent versions to use, in a manner similar to the dispelling of the Planar portals forcing Raziel to learn to use Burial sites to enter the Material Realm.[DEF][DEF-C2][3]

"Amy wanted to include a cutscene or artwork indicating that the fonts had been destroyed, implying that the Elder God had pulled them under or caused them to be destroyed in some other way, but it didn't fit in the final game"
―—Daniel Cabuco[3]

It is indicated that this was part of the intent to appeal to newcomers who would not understand the significance of the scene.[3]

Additionally, the presence of three cut wraith blade enhancements suggests that there were originally intended to be seven Reaver font variants rather than four, though little is known about their designs or placement.[4][5][5][6][7]

Early versions of the Reaver fonts can be observed in concept art in Bonus materials and in prerelease images such as those of the Air Forge demo - these imply that the fonts underwent some design changes in the course of development. Concept art depicting the Lake area reveals several fonts similar to the final design, however at least one early gameplay image reveals a much different design - with a wider cauldron-like basin surrounded by several claw-like protrusions and a wide base decorated by 'wave' patterns - was initially implemented in the game. The demo and later promotional images all use the final designs with only minor differences (especially in the particle effects); ultimately suggesting that the initial implementation of the fonts differed a lot from its concept before it was finally returned to a design closer to cconcept art. The placement and symbolism of the fonts in the concept art perhaps suggests an association with the removed Spirit Forge and Spirit Reaver.[SR2][8][9]

The appearance and usage of the Reaver fonts is undoubtedly inspired by real world Baptismal fonts found in religious buildings and used to baptize new adherents to the religion, although it is unclear if those found in Soul Reaver 2 are similarly filled with liquid or if the lids can even be removed.[10] The process of 'baptizing' the blade is arguably a development of the process intended to be used in Legacy of Kain: Soul Reaver where Raziel could change between different elemental Reaver enhancements he had gained simply by passing it through that element - only the Fire Reaver, which was re-imbued at bonfires, was completed and finished in the retail version.[11][SR1][12]