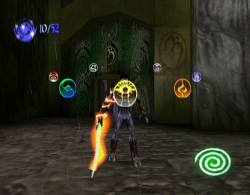 The Ring Menu, also known as the Glyph menu, Glyph spell menu or Select menu, is circular menu interface used in Legacy of Kain: Soul Reaver and Soul Reaver 2 to select Glyphs and other similar applications.

The Ring Menu first appeared in Legacy of Kain: Soul Reaver, where the menu was accessible through a specific button press and consisted of seven slots for Glyph spells arranged in a circular pattern. Raziel started with a single position filled - The Shift Glyph - all others were represented by white dots and gaining their Glyph spells was entirely optional. In order to acquire the other spells, it was necessary for Raziel to solve the specific Glyph altar related to the spell; solving a puzzle which unlocked the particular Glyph and opened their entry on the ring menu. Each of the Glyphs consumed a different amount of Eldritch energy which was displayed in the ring menu in the top-left corner: The Force Glyph costs 1, Stone costs 2, Sound costs 4, Water 6, Fire 8 and the Sunlight Glyph costs 10 Eldritch energy; only the Shift Glyph costs no energy. All of the Glyphs would be 'greyed out' and inaccessible when in the Spectral Realm, with the exception of the Shift Glyph which was only available if Raziel was stood on a planar portal with a full Health coil. Glyphs would also be greyed out if Raziel's eldritch energy was insufficient to cast the spell.[SR1][1][2][3]

One Glyph spell - the Spirit Glyph - was intended to feature in the ring menu, but the glyph and its accompanying Reaver enhancement were ultimately cut due to timing and budgetary constraints. Though it does not appear in the retail version of the game, preview material reveals that the glyph was implemented and included in the ring menu in early stages of development, taking a position between the Stone and Force glyphs.[4]

The following table list the ring menu items both present in and cut from Legacy of Kain: Soul Reaver, illustrating the symbols and their corresponding Glyphs, cost and availability :

The Ring menu returned in Soul Reaver 2 but was significantly reduced for that title, consisting of only three symbols; only two of which were initially available. The Shift Glyph/Shifting icon was the only returning icon, featuring a slightly redesigned symbol, it again allowed Raziel to switch Realms but could only be used in the Spectral Realm when stood on a planar portal with a full Health coil. The next icon related to the World map and this displayed a simplified map of Nosgoth with the current area and objective highlighted and previously visited locations listed - this was the only icon available continuously in either realm. The third and final symbol represented the Reaver and summoned the Wraith Blade to the Material Realm, however it was not gained until part-way through A Reaver in Time when the Wraith blade was upgraded following its encounter with Moebius's Staff - previous to this the wraith blade depended upon Raziel being at full health and after it could be summoned at will.[SR2][5][6]

Several Glyphs related to the Pillars of Nosgoth were planned to complete the ring menu for Soul Reaver 2 but these were ultimately cut and removed due to time constraints. Initially planned to revolve around "new ways to interact with the environment" rather than the direct combat applications of their predecessors, these glyphs were not featured in the Ring menu in the retail version of the title, which only contained the three standard interactions; however the Pillar-related Glyphs did appear under Debug menus as non-functional entries and pre-release demo versions (like the Air forge demo) also featured debug options allowing the full 12-item ring menu to be manifested with inactive placeholder symbols or white dots representing the incomplete/cut glyphs. No applications or abilities of the Soul Reaver 2 Pillar Glyphs are currently known.[7][8][9][10][11][12]

The following table list the ring menu items both present in and cut from Soul Reaver 2, illustrating the symbols and their corresponding applications and availability : 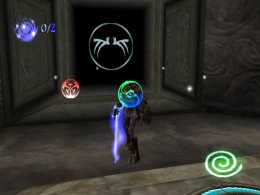 The Soul Reaver ring menu with Shift Glyph selected, Force collected and others undiscovered and represented as white dots