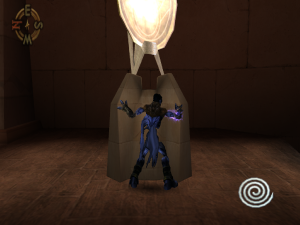 Raziel rotates a reflector in the Light Forge

Rotatable and Moveable Objects, also known as Rotatable Objects, were a set of objects in the Legacy of Kain series that could be interacted with by rotating them, turning them on the spot or moving them around a location. Appearing in a number of different forms according to the environment, the objects were often a component of puzzles and could be seen throughout the series, with the rotating objects appearing most frequently in Soul Reaver 2 and Legacy of Kain: Defiance.

The first title which allowed objects to be rotated was Legacy of Kain: Soul Reaver which had featured several variants, such as the rotatable switches seen in the Silenced Cathedral and the Wheels and valves seen elsewhere - however most of these were effectively switch variants which moved between two set states and were not puzzle related. Later on in the title Raziel acquired the ability to move Constrict objects - these could be turned on the spot through several states and often aided in basic puzzles, however they were only usable with the aid of the Constricting ability and otherwise they were static and unmoveable.[SR1]

Soul Reaver 2 built upon the developments of Soul Reaver and was the first to feature true Rotatable objects which could be freely rotated without any abilities. Raziel encountered the first of these in A Reaver in Time as he left the Sarafan Stronghold, where it was necessary for him to rotate a large wheel to open an underwater passage to the outer section of the Great Southern Lake. This passage would be revisited in later chapters.[SR2][SR2-C1][SR2-C3][SR2-C5] Other rotatable objects would be seen in Through the Swamp and The Light Forge (chapter) as Raziel explored the Dark forge and Light forges respectively. These objects, often taking the form of (or accompanied by) circular reflectors, were more puzzle orientated and typically allowed Raziel to channel beams of light through the forges, eventually allowing him to activate each forge.[SR2][SR2-C3][SR2-C4]

Rotatable objects returned in Legacy of Kain: Defiance, where they were often involved in simpler puzzles to do with matching symbols and orientations. The first rotating object was found by Kain in Pursue Moebius and required him to rotate a small "statue" marked with a Sarafan symbol to unlock the Flame fragment of the Balance Emblem and gain the Flame Reaver enhancement.[DEF][DEF-C3] Another resided close to the Pillars and protected the passage between the Pillars and the Cemetery vista - this was the first to be discovered by Raziel (after it had been unlocked and used by Kain with the aid of the Stone Disc centuries earlier).[DEF][DEF-C5][DEF-C6] Later rotatable objects were found in vampire areas such as the Fire forge entrance, Air forge, Earth forge and Vorador's Mansion - with most involved in puzzles requiring symbols to be matched.[DEF][DEF-C6][DEF-C8][DEF-C10]

Another sub-class of Rotatable and Moveable objects were "moveable objects", which arguably encompassed several types of object that could be pushed to move the object around an area rather than rotate it on the spot. Most often the moveable objects seen throughout the series were types of "Blocks". These were seen throughout the series and were often involved in puzzles - in contrast to the rotatable objects, blocks were not stuck in place and could be grabbed, dragged, pushed, pulled and even flipped to achieve various ends. Arguably block usage and puzzle had begun with Blood Omen: Legacy of Kain, which had used Chairs and Boulders in a similar way to the later series used blocks.[BO1][SR1][SR2][BO2][DEF] 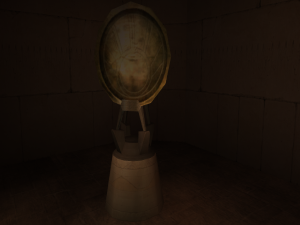