Dumah's mountain stronghold was constructed in Nosgoth's northern wilderness as part of Kain's empire, and teemed with the life of vampire kind. Following Raziel's execution, however, the Dumahim were taken by surprise by the human vampire hunters. In the attack, Dumah was impaled by multiple stakes, and the walls of his city were torched. The few Dumahim that escaped were reduced to scavengers, and the "silent city sat in frozen tableau."[SR1-Misc]

Raziel was shocked to discover the fate of the Ruined City after his resurrection. He revived Dumah, only to burn his brother to death using the City's furnace before visiting the Oracle's Cave. 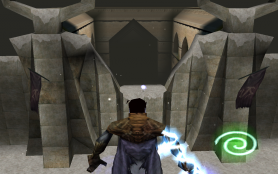 "Beyond the cliffs that witnessed your execution, a silent city sits in frozen tableau. Locked in eternal limbo, they await redemption, or release." Ariel

The Ruined City of the Dumahim, also known as The Ash Village, was Dumah's clan territory in Legacy of Kain: Soul Reaver.

Much like Raziel's own territory he found it abandoned and desolate, with only the occasional Vampire Wraith present. Initially Raziel believed that there the Dumahim were subject to a vampire genocide, much like his own clan, which scattered the Dumahim clan and left them nomadic scavengers. However after prompting from the Elder God, he discovered that it was in fact human vampire-hunters who were responsible. Dumah, in his arrogance had not suspected an attack from the least likely assailants.
In the throne room, Raziel discovered and revived Dumah, and was able to lure him into the Ash Village's furnace room to dispose of him, and gain the Constrict ability, enabling him to enter the nearby Oracle's caves and the Chronoplast.

Being the furthest point North visited in Soul Reaver, The Ash Village was liable to snowing and much of the area surrounding the Dumah's territory and the Oracle's caves was covered by a blanket of settled snow. This may presumably be a reason for the large furnace room.

The name "The Ash Village" however may suggest a different possibility altogether, in that Dumah's territory was close to the deleted Turelim clan territory, which was also home to furnaces and the smokestack seen in the opening FMV. It is possible therefore the 'snow' is in fact ash falling from the smokestack.