Sarafan Archers[1][2] were an enemy class seen in Blood Omen 2 . They were first seen in Chapter 6: The Industrial Quarter and were later featured in the Canyons and the Wharves, they were often teamed with other Sarafan troops to take advantage of their ranged Fire Arrow attack[BO2].

Sarafan Archers were scantily clad, and wore a black 'hood' with the Sarafan symbol on the back. They were first seen guarding the entrance to the Industrial Quarter in Chapter 6 and were one of Kain's major enemies in that chapter. They were typically armed with a Long Sword and a Crossbow, allowing them to shoot Fire Arrows at Kain from a distance, or attack with their sword when he came closer. They were much more agile than any of the other Sarafan troops and had a spinning Unblockable attack[BO2]. 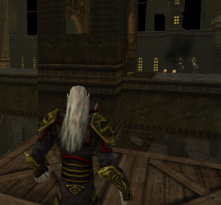