"These ancient obelisks were mysteriously attuned to my spiritual essence.
By simply touching the symbol, I could safely preserve an imprint of my soul – and thus create a milestone to which I could return when weary, and from which I could resume my journey."
―Raziel — Listen (file info)[src]

Save Altars, also known as Save Obelisks, Save Pillars or Save Points, were structures featured in Blood Omen: Legacy of Kain and Soul Reaver 2 which allowed Raziel or Kain's progress up to that point to be saved. Once saved, the game could be resumed from that point at any time as long as the save file was not overwritten or deleted.

"Within the walls of these chambers I could find respite. And, if I so chose, resume my journey when my weariness abated."
―Kain — Listen (file info)[src] 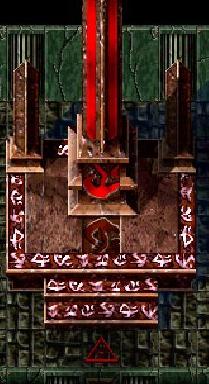 Save altars were first featured in Blood Omen: Legacy of Kain, where they allowed the player to save progress - or provide Kain with "respite" as it was framed in the game. They consisted of a raised platform dominated by red coloring, covered in rune symbols with a central obelisk atop a larger symbol with two smaller obelisks at the back corners of the platform. Kain discovered the first save altar in his mausoleum shortly after emerging from his grave in Seeking Revenge and thereafter they were seen fairly regularly throughout Nosgoth, allowing progress upto that point to be saved. When activated the option to save would be presented to the player followed by a list of save slots and when loading or resuming a game, gameplay would start from the last activated save point, with Blood and Magic energy quickly filling to their set levels.[BO1][BO1-C2] 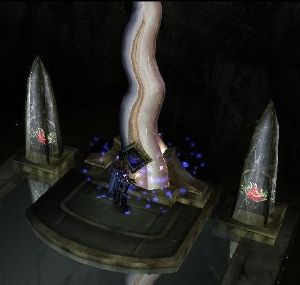 Using a Save point in Soul Reaver 2

The altars returned in Soul Reaver 2, albeit with an altered design. Although functioning similarly to those in Blood Omen the devices were given a bit of expanded explanation - that they were attuned to Raziel's spiritual essence and by using part of his soul he could leave an imprint of himself within the edifice to which he could return to when weary and from which he could resume his journey. The appearance of the platforms was similar to the shape of Kain's save points in Blood Omen except the central obelisks were now a flamberge shape like the Soul Reaver. There were 5 of these altars in Soul Reaver 2, positioned on the 'outer Great Southern Lake, the Subterranean Pillars Chamber, the Swamp, Uschtenheim and inside the Fire Forge - allowing them to be easily accessed between the major set-pieces of the story. When activated the option to save and select a slot was given to the player and when loading or resuming a game, gameplay would start from the last activated Save point (or Checkpoint if Raziel had 'died' in the Spectral Realm.)[SR2][SR2-C1]

Although very similar in appearance, the save altars of Blood Omen and Soul Reaver 2 did have some design differences - arguably with a certain amount of theming to the protagonist character.[BO1][SR2]

Blood Omen save altars consisted of a bronze or red-brown stone platform surrounded by a red border containing several white runic symbols. At the front of the platform were two steps which led up from the floor, each of which was fronted by the same red border containing white runes. At the back of the platform stood three obelisks, two of which were positioned in the back corners of the platform and were made of the same stone texture as the platform itself: there were also variants which had five obelisks - with the extra two positioned a short distance in front of the platform, at the front corners. Dominating the center and back of the platform was the last obelisk, much larger than the others and colored a much brighter red tone. Beneath the main obelisk was a small square raised platform with a large rune symbol on the side somewhat resembling a three-fingered hand-print colored bright red. The same symbol decorated the floor of the platform beneath the main obelisk colored a darker red shade.[BO1]

Soul Reaver 2 save altars were slightly different and consisted of a steel-blue reflective platform surrounded by a grey stone border. At the front of the platform were a set of three stone steps which led up from the floor, with the same stone style as the outer platform border. Around the sides of the platform it was decorated by a set of red runic symbols on a black background. The platform was now surrounded by four small obelisks - two at the back corners of the main platform with two additional obelisks (that were absent from the Blood Omen altars) at the front of the platform on smaller platforms beside the steps, each one decorated with the same grey platform base and rune symbols sides as the main platform. Each obelisk was colored a light blue color and were partially transparent with a hand print styled rune symbol and decorative marks observable in white, dark red and grey shades. Dominating the center and back of the platform was a much larger fifth obelisk, colored white and fashioned in a flamberge-shape resembling the Reaver blade. On the side of the main obelisk was a small grey diamond shaped plaque decorated with another small red handprint styled symbol. Beneath the obelisk was a small two tiered raised platform in dark grey shades against the reflective main platform.[SR2]

Save altars can be seen in several of the Soul Reaver 2 pre-release images which show there were relatively few design changes in the latter stages of development, although some do appear plainer and the camera angles used in their cutscenes appeared to have been slightly altered for the retail release.[SR2]