"Consuming Zephon’s apostate soul has bestowed on you a new gift. Like his vampire spawn, you are able to scale certain walls which are otherwise impassable - but only in the physical realm. In the spirit world, these insubstantial edifices will not support you."
―Elder God — Listen (file info)

Scalable walls, also known as Climbable walls or simply Walls, were an environmental feature first introduced in Legacy of Kain: Soul Reaver and recurring in Soul Reaver 2 and Legacy of Kain: Defiance. Represented by multiple horizontal lines across a surface, scalable walls were initially impassable, however once Raziel defeated Zephon in Soul Reaver he gained the ability to scale them in the Material Realm and from then on he could climb any surface marked with the distinctive pattern. Though Raziel could not initially scale the walls in the Spectral Realm, by the time of Defiance he was able to scale them in both realms. 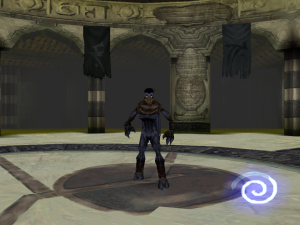 Scalable walls first appeared in Legacy of Kain: Soul Reaver as specially textured walls consisting of multiple horizontal lines.[SR1] The first of these walls would be observed as Raziel exited the Underworld in Prologue (SR1)[SR1-C1] and they could be seen throughout Nosgoth, despite being initially unusable.[SR1] Later when Raziel traveled to the Silenced Cathedral in The Silenced Cathedral (chapter), he was able to defeat his brother Zephon and by consuming his soul, gained the Scaling walls ability of the Zephonim vampires.[SR1][SR1-C5] Unlike the Zephonim, Raziel was only able to use the ability on the specially textured scalable walls in the Material Realm, allowing him to reach higher areas and access previously blocked locations.[SR1][SR1-C5][1][2][3] Initially Raziel was able to climb one of the walls in the Pillars chamber of the Sanctuary of the Clans to climb beyond it and reach the exposed Tomb of the Sarafan;[SR1][SR1-C6] and he would frequently be called to use them throughout the rest of the game.[SR1]

Scalable walls returned in Soul Reaver 2, where with Scaling walls now an innate ability, Raziel was able to use scalable walls to climb at any time throughout all three eras of Soul Reaver 2, again allowing Raziel to reach higher levels. As before, Climbing was only available in the Material Realm and would be aborted if Raziel Shifted or was struck by an enemy or projectile, causing Raziel to drop to the floor below.[SR2][4][5] 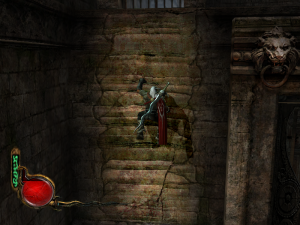 Scalable walls were again featured in Legacy of Kain: Defiance and as Scaling walls was now a common ability the walls could for the first be used by Kain as well as Raziel. As in previous titles, the walls could be climbed from the beginning simply by jumping towards them, though the process would be aborted if struck. There were several minor changes however, with Raziel now able to use them in the Spectral Realm as well as the Material Realm and both characters could also able kick-jump off the walls to propel themselves away to higher platforms behind them.[DEF][6][7]

This article is about the environmental feature. For the ability required to climb them, see Scaling walls.