The Scepter, also known as the Sarafan Symbol Club was a weapon wielded by Kain in Blood Omen 2.[1]

The Scepter first appeared in the Upper City in the hands of the Sarafan priests controlled by Marcus, it was a club fashioned in the shape of the Sarafan symbol. It shared many attacks in common with the Club and was a stronger, faster version of it[BO2].[2][3] 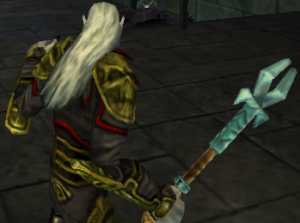 Kain armed with the Scepter

The Stealth kills of the Scepter included a decapitation and a downward smash to the back (the same as the spiked club without the jump). If Grabbed, Kain could smash an opponent in the groin or 'bat' them across the room[BO2].[2]