"Still so arrogant after all these years – thinking you've devised some brilliant plan. You know nothing. You have read the signs but missed their meaning. You believe you are that myth of Vampire prophecy – the Scion of Balance – and that Raziel holds the key to fulfilling your destiny."
―Moebius[src]

The Scion of Balance was a prophesied figure in ancient vampire legend, destined to restore order and Balance back to Nosgoth during a time of great peril. It was foretold that the Scion would be a Balance Guardian fated to return the Pillars of Nosgoth to vampire rule, but the Scion was distinct from the vampire champion, a similar prophesied messiah of yore. A mural depicting the Scion had been painted in the Vampire Citadel.

The concept of the Scion was first introduced in the fourth timeline in Legacy of Kain: Defiance, where it was revealed that Kain (correctly) believed he was, or would become, this entity. Janos Audron, members of the Circle of Nine (Ariel, Moebius and Mortanius), the Elder God, and the Hylden Lord all demonstrated some awareness of the Scion prophecy, but several discredited him as a myth or mistook his true identity.

"Raziel, there may yet be hope. There is One who will be called; you must seek the Scion of Balance –"
―Janos Audron[src] 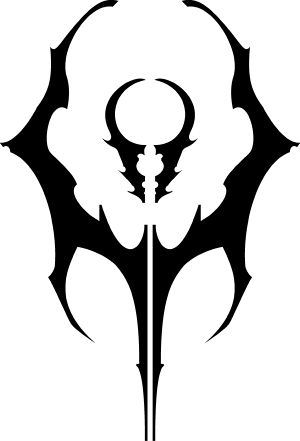 Daniel Cabuco's design for Kain's symbol, which resembles the pose of the Scion mural.

The prophecies concerning the Scion were formulated by the ancient vampires before Nosgoth's recorded history, most likely by the original Time Guardian (whose role granted him the ability to view and interpret the time-stream, and hence a limited, intrinsic form of omniscience).[1][SR2-C5] During this era, a mural of the Scion was painted in the Vampire Citadel's Spirit Forge, depicting it as a male ancient vampire with blue skin, white hair and black wings. In this interpretation, the Scion possessed the Soul Reaver, and was crowned with the symbol for the element of Spirit.[DEF-C12]

In Nosgoth's early history, when Kain attempted to interrogate Moebius in the Sarafan Stronghold, Moebius asserted that Kain believed he was the Scion of Balance, but dismissed this idea as "messianic delusions"; by this era, the ancient vampires were extinct, their "scrawled misdirections" fading into legend.[DEF-C1][SR2-C3] When Kain demanded information on Raziel's whereabouts, Moebius directed Kain to the Vampire Citadel, and Kain contended that "in sending me here Moebius had done me an unexpected – or perhaps an unwitting – service. For it was my destiny, not Raziel's – my role as Scion of Balance – whose secrets I was here to discover".[DEF-C3][DEF-C7]

Kain encountered murals depicting the vampire and Hylden champions (two heroes wielding the Reaver, destined to destroy each other), and arrived at the assumption that he was the vampire hero, fated to battle Raziel.[DEF-C7][DEF-C9] Similarly, Raziel, in the Blood Omen era, discovered murals of the heroes, and was driven by Ariel, Mortanius, the Elder God and the Hylden Lord to the conclusion that he was the Hylden champion.[DEF-C6][DEF-C8][DEF-C10] In reality, Kain was neither: he represented the Scion of Balance, an independent figure, and Raziel was both of the champions. His free will entailed that he could take action to support the vampires and the Hylden, and his inevitable destiny - to become the ravenous entity trapped within the Reaver - ensured that he would eventually be forced to consume himself.[DEF-C12][DEF-C13][2][3]

"...only then will the Scion of Balance be armed for his true endeavor..."
―Ariel[src] 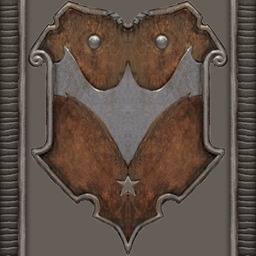 Kain's Family Crest as it appears in Legacy of Kain: Defiance, resembling the Scion mural.

In the Avernus Catacombs, Mortanius informed Raziel of the Scion of Balance, explaining that it would "save Nosgoth – the Pillars will return to vampire guardianship as intended, and your race [the Hylden] will be cast down forever". However, he incorrectly believed the Scion and the vampire champion were one and the same, describing it as "the champion foretold by [his] masters, who is destined to be [the Hylden champion's] destroyer."[DEF-C12] He had previously had the young Kain assassinated and resurrected using the Heart of Darkness, creating a vampire Balance Guardian and apparently fulfilling the vampires' prophecy.[DEF-C12][BO1-C1]

The Elder God and the Hylden shared a common interest in seeing the Scion of Balance destroyed, and encouraged Kain and Raziel's misinterpretation of the prophecy, compelling them both into battle.[DEF-C12][DEF-C13] In the Blood Omen era, Raziel defeated Kain in Avernus Cathedral, apparently killing him by ripping the Heart of Darkness from his chest. After he used the Heart to resurrect Janos Audron, the two discussed his destiny. Janos sent Raziel to the Spirit Forge, where Raziel found the Scion mural, and the Elder God. The Elder was triumphant, confirming that "it was Kain's destiny that mattered all along".[DEF-C12]

When Raziel activated the Spirit Forge, the souls of Nosgoth's deceased Balance Guardians were called to imbue his Wraith Blade and create the Spirit Reaver, including Ariel. Ariel instructed Raziel to "unite that which has been set asunder", and thus arm the Scion of Balance for his true endeavor, but Raziel was dubious: "if the sword was endowed for the Scion of Balance – for Kain – and he was now dead, what hope remained"?[DEF-C12] Later, however, Kain returned, and Raziel used the Spirit Reaver to purify him of the corruption of the Pillars before entering the Reaver. Healed of Nupraptor's curse, and capable of perceiving the Elder God, Kain battled the "true enemy". He could now, presumably, hope to defeat the Elder, restore the Pillars, and ensure the vampires reasserted control of their guardianship.[DEF-C13][4] 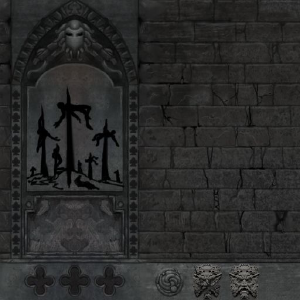 Textures from the cut Undercity area in Legacy of Kain: Soul Reaver, featuring the Scion of Balance symbol.

Following the release of Legacy of Kain: Defiance, series director Amy Hennig and team members Jennifer Fernández, Richard Lemarchand and Kyle Mannerberg clarified details surrounding the Scion which were not made explicit in the game.[2][3] They explained that "the Scion of Balance is the figure who is destined to return the Pillars to vampiric rule, the one who was prophesied by the ancient Vampires. Kain is both [a Balance Guardian and the Scion], whereas the other Balance Guardians were not". Asked as to the two champions' identity, they responded: "[Raziel] is both. His free will results in a hybrid destiny, where he is both redeemer and destroyer."[2] The Scion was neither of the two: "as the Scion of Balance, Kain isn't really either one of the figures in the murals. Raziel is both of them. This is part of what Raziel realized at the end of Defiance".[3]

According to Hennig, Kain's "nature as the Scion of Balance allows him to survive" without the Heart of Darkness.[2] Series artist and Legacy of Kain: Defiance art director Daniel Cabuco offered a further comment on Kain's dual role as Guardian and Scion: "when Kain returns, he is still a Balance Guardian. They past [sic] united souls pass into him and elevate him to the true, purified, Scion of Balance".[5] On the Scion's duties, he explained: "The Scion of Balance balances on a greater scale [than the Balance Guardian], balancing the world's entities and the Pillar's place in it. Purified and empowered with the Soul Reaver, he can use the powers of all the guardians to accomplish this goal, though to a lesser extent than the pure circle members. (Including pruning the Elder God's influence.. one sliced tentacle at a time if need be)."[6]

Though Hennig previously stated that he would not develop wings during the end of development on Legacy of Kain: Soul Reaver, Crystal Dynamics considered giving Kain wings in the cancelled sequel to Legacy of Kain: Defiance, Legacy of Kain: The Dark Prophecy: "there was some discussion about him having black wings eventually, but that was only to match the Scion of Balance Emblem. (perhaps like a temporary powered up mode.. similar to Dante's Devil Mode)".[7][8] Cabuco also stated that the symbol on the medallions supporting Elder Kain's tabard and shoulder-harness "was something that Kain found in his exploits (either in Moebius' Time Tower, or some other are) [sic]. The symbol came to represent the Scion of Balance, but he didn't know it at the time. (He was just mysteriously drawn to it)".[9]