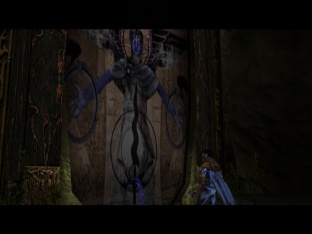 Sealed Doors, also known as Sealed Barriers, Reaver Doors, Emblem Doors or Artifact Doors, were special doors featured throughout Legacy of Kain: Soul Reaver, Soul Reaver 2 and Legacy of Kain: Defiance that were marked with a particular symbol and prevented entry until the correct object or elemental Reaver was acquired.

Sealed doors broadly consisted of any door which was initially encountered as locked with the method of unlocking the door marked upon them by a symbol, silhouette or emblem representing the correct object or empowerment required to unlock them.

Two distinct version of sealed barriers were seen in the series depending upon the method used to unlock them. Reaver doors were the most obvious requiring the use of the Wraith Blade or a symbolized element to open. Another set of sealed doors required special artifacts to open and were symbolized by the shape of the artifact required.[SR1][SR2][DEF]

Reaver doors were the first and perhaps most frequently encountered sealed door variant in the series.[SR1][SR2][DEF] They could first be seen in Legacy of Kain: Soul Reaver where four such obstacles could be encountered. In his first confrontation with Kain at the Sanctuary of the Clans and the Pillars Raziel's exit was blocked by a sealed door marked with the Soul Reaver - only when Raziel defeated Kain and gained the Wraith Blade could he escape the room by unsealing the door. Shortly after, he would use the wraith blade again on the similarly decorated outer door of the Silenced Cathedral to enter the building. Two optional doors were also present, with Raziel able to move aside a specially marked "coffin" in the Necropolis with the wraith blade and reach another door marked with the blade which could be unsealed in the same manner - this led to a small chamber containing an Eldritch energy power up.[SR1][SR1-C5][SR1-C6][SR1-C4][1]

Sealed doors returned in Soul Reaver 2 where they took up a much greater role along with the elemental puzzles. The first sealed door was encountered by Raziel in the chapter A Reaver in Time as he left the Sarafan Stronghold and came across the elemental lock to the Light Forge in the Great Southern Lake but was unable to enter. Later in Decision at the Pillars as he progressed beyond the Pillars of Nosgoth he discovered a large sealed door illustrated with a large image of an Ancient vampire and a mural of the Reaver. Using the Wraith blade, Raziel was able top unseal the door and enter the Subterranean Ruins within. As he explored further Raziel discovered several elemental forges throughout Nosgoth - each one was sealed at the entrance with a different sealed door and many bore several sealed barriers of unique designs within as part of their puzzles. Within the Dark forge, Raziel discovered the first elemental variants which required the correct elemental Reaver to be imbued to unlock and each of these was marked with the appropriate symbol on the door. After this, Raziel would frequently encounter puzzles revolving around imbuing the correct Reaver enhancement.[SR2][SR2-C1][SR2-C2][SR2-C3][SR2-C4][SR2-C6][SR2-C8][2][3]

Legacy of Kain: Defiance also featured sealed doors in a prominent position. Here the Reaver doors returned to a more unified design distinguished by mural symbols and colors. Raziel first encountered these sealed doors in the Cemetery in the chapter Find the Path to the Pillars where Raziel could gain entry to the Dark Forge , allowing him to open the way to Kain's Mausoleum and the Light forge in the Material Realm. Each of the 'entrance chambers' which contained the Warp gates to the elemental forges within the Vampire Citadel were locked with sealed doors, many with elemental variants of the locks. As before the locks were frequently used as puzzle elements, preventing entry until Raziel had gained the appropriate element.[DEF][DEF-C4][DEF-C5][DEF-C6][DEF-C8][DEF-C10][DEF-C12][4][5]

The other variant of sealed doors seen within the series were Artifact or Emblem doors, which were particularly associated with Soul Reaver 2 and Legacy of Kain: Defiance.[SR2][DEF]

The first of these were the "Emblem Doors" encountered in Soul Reaver 2 which required special Emblem keys to unlock. The first emblem doors could be found in Through the Swamp as Raziel explored the Dark Forge and it was necessary for him to defeat a swordsman thrall which bore the keys as shield to recover the key, and by placing the key in the circular slot on the door Raziel would be able to open the emblem door. Later emblem doors would be encountered in the Air Forge chapter and Janos Audron's Retreat - in both cases the keys would be protected by more powerful Greater thralls.[SR2][SR2-C3][SR2-C6][SR2-C8][2][3]

In Defiance there were more barriers and doors related to artifacts and these would first be encountered as Kain breached the Sarafan Stronghold in Infiltrate the Stronghold where he would first encounter an unusually marked door in the Chapter House, subsequently discovering the Falcon Insignia in Moebius's chambers beneath the stronghold and using it to unlock the door in Pursue Moebius, thereafter both protagonists would encounter several varieties of doorway which required the proper placement of an item or artifact (often indicated by a symbol or drawing on or near the barrier itself) to open them.[DEF][DEF-C1][DEF-C3][DEF-C4][DEF-C7][DEF-C8][DEF-C9][4][5]

One particularly noteworthy sub-division was the Balance Emblem doors utilized by Kain which were activated with particular fragments from the balance emblem and were decorated with an image of the emblem but missing the necessary fragment. The last one of these in the inner sanctum of the Vampire Citadel actually featured a silhouette of the whole emblem backed by an image of the dais Pillars of Nosgoth - indicating that the emblem needed to be fully completed before entry could be gained.[DEF][DEF-C5][DEF-C7][DEF-C9][4][5]

The designs of sealed doors are diverse and vary throughout the series, though several elements of the design can be said to be recurring and are often used in the design of the sealed doors, with similar types of doorway often sharing a similar appearance or similar ingredients:

In Legacy of Kain: Soul Reaver the Reaver doors bear unique designs, but all are based on a similar theme, with two depictions of the Reaver blade (either crossed or parallel) and all notably featuring an obvious "keyhole" motif where the Wraith Blade was inserted. The designs around the keyhole were different however, with two barriers using a 'starburst' or 'explosion'-styled design one making use of four outward facing triangles, roughly resembling a flower and the coffin making use of a triangle surrounded by the burst, more resembling a traditional keyhole. The decorative designs and motif around the outside of the doors were different and unique for each doorway.[SR1][SR1-C5][SR1-C6][SR1-C4]

Soul Reaver 2's Reaver doors were even more diverse, with designs for the barriers accompanied by widely varying artwork and symbolism. Some of the common features were however standardized, with a circular or circular and slit keyhole and a symbol for each of the elemental attunements - with a different standard symbol for doors requiring only the Wraith Blade itself.[SR2][SR2-C1][SR2-C2][SR2-C3][SR2-C4][SR2-C6][SR2-C8]

Emblem doors also featured diverse artworks and opening mechanisms with common elements, with each door featuring a circular (albeit sometimes decorated) hole for the Emblem keys to fit into, while symbolic representation of the elemental symbols were also common.[SR2][SR2-C3][SR2-C6][SR2-C8]

The Reaver doors featured in Legacy of Kain: Defiance were even more uniform than their predecessors, with each represented as an arched double doorway with a circular design at the center of the door. Inside this were two circular motifs placed one above the other - the top circle contained the symbol of the wraith blade or appropriate elemental enhancement; while the bottom was effectively a large golden lock with a vertical slit for the Reaver to be used as a key, not unlike key-lock in real world door locks. Each design had unique subtle variations in color as did the particle effects emanating from the lock.[DEF][DEF-C4][DEF-C5][DEF-C6][DEF-C8][DEF-C10][DEF-C12]

The locks associated with the Balance Emblem were similarly uniform with each consisting of a golden circular dial with an impression of the completed emblem on it and the required fragment to unlock the barrier missing from the design. The only exception to this was the final emblem lock on the 'inner sanctum' of the Vampire Citadel, which required the emblem to be completed and was thus decorated with a space for the full emblem backed by the same design as was featured on the pillars dais. The Emblem locks could be placed on a variety of objects, walls, gates and doorways, but most often they were found on the golden doorways of the Citadel which consisted of several decorated interlocking circles.[DEF][DEF-C5][DEF-C7][DEF-C9]

The artifact locks of Defiance were a lot more diverse and unique, with each one bearing several unique designs - the only unifying features for these doors the presence of a space for the appropriate artifact on or nearby the doorway and occasionally illustrations of the item itself.[DEF][DEF-C1][DEF-C3][DEF-C4][DEF-C7][DEF-C8][DEF-C9] 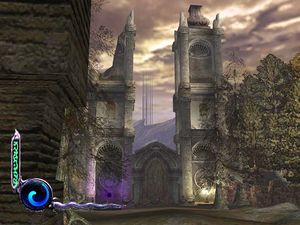 This article is about the doors or barriers unlocked with various Reaver enhancements, the Balance emblem fragments or sepcific artifacts. For the magical barriers protecting doors that were dispelled by the Balance hub, see Blessed barriers. For other locked doors, see Doors.