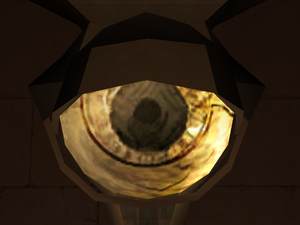 A Sentry Eye Attacks a Thrall

Sentry Eyes, also known as Sentries, were featured in Soul Reaver 2. They were security devices, presumably built by the Ancient Vampires, which resembled giant eyes and required the Dark Reaver to bypass.

Sentries resembled large wall-mounted eyes. When disturbed by Raziel or other creatures, Sentries would produce a brief rain of sparkles before unleashing a fatal blast that was powerful enough to disintegrate Raziel's Material manifestation. Sentry Eyes could be 'blinded' by the Reaver Bolts of the Dark Reaver, which would cause the eyes to roll back allowing Raziel to temporarily pass 'unobserved'.[SR2]

Thereafter Razel would encounter Sentry eyes infrequently through the rest of Soul Reaver 2. Often they were seen in forge areas or other Ancient vampire constructions. With three present in the Air forge (one of which defended the entrance to the forge itself) and three present in Janos Audron's Retreat. On each occasion it was necessary to blind the Sentries with Dark Reaver bolts to bypass them.[SR2][SR2-C6][SR2-C8]

Sentry Eyes were seen only in Soul Reaver 2. With the removal of Reaver bolts from Legacy of Kain: Defiance, Sentries were not seen in further games - although similar 'watcher guardians' that could be nullified with the Dark Reaver were seen in Defiance[SR2][DEF] Switches activated by regular (non-elementally attuned) telekinetic powers were also present in both Blood Omen 2 and Defiance[BO2][DEF]

In early trailers and the US Air Forge demo, Sentry Eyes can be observed with a notably differet color scheme, where they appear as a white or pale blue sclera with a yellow iris and red pupil. This is changed to yellow sclera and iris with dark blood vessel effects and black pupil in the European release Air forge demo and retail version.

Early Trailers also show that a different effect for the activaton of the devices, with yellow sparks and yellow lightning forks initially beng used in place of the red effects seen in later versions.[1][2][SR2]